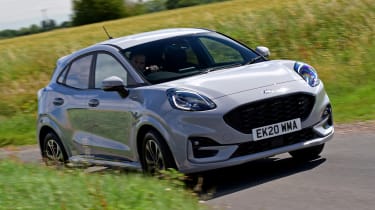 It’s so far, so good for the Puma. We love that it drives like a small Ford should – it’s feisty and enjoyable – but it’s the practicality in a small package that has really impressed us. Our man says it’s exactly what he needs from a car to fit his lifestyle.

No sooner have I said farewell to one fleet car than I’m welcoming its replacement – and I’m really excited about this one, because the Ford Puma is most definitely my kind of car.

Don’t get we wrong, I got on well with my Mazda 3, but I like small SUVs and the style they offer, so that was the first thing that drew me to the Puma. Of course, Ford’s nameplate was known as a small coupé back in the nineties, but fashions change, and while compact two-doors were popular then, now people want SUVs.

It’s easy to see why with the Puma, because it looks great. Let’s touch a little on why. This £23,740 ST-Line version looks slightly sportier, with its 17-inch alloys, while the £750 Grey Matter Exclusive paint certainly suits the curvy bodywork, but that’s quite a lot to pay when other colours look just as good and are cheaper.

Fundamentally, though, the Ford nails the proportions a small SUV needs to have, and underneath that stylish cloak the car is based on the same platform and uses the same mechanicals as the current Fiesta, so it’s great to drive as well. It’s also a versatile piece of kit for its size, as I’ve already found out.

My photography equipment spilled over into the cabin with the Mazda 3, but thanks to the Puma’s clever MegaBox storage compartment under the boot floor, the 68-litre void will easily take my portable pressure washer and a five-litre tub of water. I can chuck my kids’ muddy shoes in there, too, and then remove the drain plug and hose the area out. It’s a very useful touch. 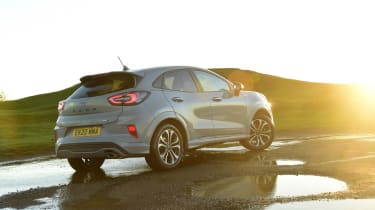 Once I’ve put the boot floor down and filled the total 456 litres available (which is not a bad size for a small SUV), it will easily take my camera bag, tripod, flash stands, cleaning gear, harness – the list goes on.

What that means is that the cabin is kept free of this clutter. There’s enough space in the back because being sat slightly higher up than in a hatch means the seats can be raised and your legs brought back closer to you. It’s a clever trick, because the Puma is still a compact car, at 4.2 metres long.

It’s this trait that I’ve been enjoying since I took custody of the Ford, too, because the lack of overhangs and that platform underneath mean it drives as well as any small SUV I’ve been in. The steering is sharp, there’s plenty of agility and it just feels fun.

I’m not totally sold on the engine, though. This 153bhp 1.0-litre EcoBoost unit is a bit drummy until you’re cruising, and even with mild-hybrid assistance, the Puma has only been averaging around 32mpg so far.

There’s also a small jolt when coming on and off the throttle as the integrated belt starter generator cuts in and out to either provide a small dump of torque or recharge the mild-hybrid system’s tiny battery.

However, these minor niggles are the only few things I’ve found after spending a lot of time in the Puma recently. My first impressions have been overwhelmingly positive, as have my wife’s. She’s a better judge than me on matters regarding style, and she likes it, so it’s a thumbs up there.

Other factors I like? Well, the digital dash is a nice tech touch and complements the eight-inch infotainment screen well. The system is great, responds rapidly and looks slick for the money, I think, and although my creaking Samsung phone is a bit old and slow for Android Auto, it’s nice to know the car has this and Apple CarPlay connectivity, because my two girls both have iPhones, so we can listen to their tunes.