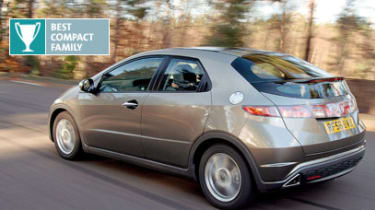 It's the class that's had the biggest influx of new models over the last couple of years. So, as you might expect, there have been a number of changes in the Driver Power top five compact family hatchbacks. In a great coup for Honda, the number one spot goes to the new-shape, British-built Civic. It's clear that the model's futuristic profile hasn't put anyone off - far from it - while its solid feel and sharp handling earned it praise. Meanwhile, showing some big improvements over its 2006 rating, Toyota's Corolla has peaked late in life. Second place overall is a tremendous result for a model that's now been replaced by the Auris, another car which is assembled right here in the UK. Last years class winner, the Mazda 3, has been relegated to fourth place by the Volkswagen Golf. However, you tell us both of these motors are great all-rounders. The only model which has been able to retain its 2006 position is Ford's Focus, which just makes it into the compact family class top five.

“Incredible! The car turns heads, goes well and still does 50mpg. And it's even more practical than my old Volvo S60.”

“Much improved from the last model, especially handling and steering. Some problems with drivability due to the electronic throttle - hesitancy etc. Gearing is too tall especially considering it's a 6-speed box.”

“Beautiful looking car that nearly delivers on all fronts. Honda missed a few chances to make it even better, some minor faults on such a new model and also a lack of ‘modern’ touches eg. Ipod adapter, keyless start etc.”

“A superb package, excellent engine the Honda 2.2 Diesel has a better performance and is more flexible than the Golf. The rear seat versatility is another practical feature, and that dashboard, come back Dr Who all is forgiven!”

“Excellent! Cheap to run, insure and as I use it for business very practical. Looks great and I like to be a bit different.”

“I am very satisfied with it apart from when it rains, if the tailgate is lifted you get very wet from water draining of the spoiler and window, also the rear lights suffer from condensation and I am told nothing can be done about it which is a little frustrating. One can only hope that both the water problem and the condensation may be modified on future Civics. The motor is very responsive with power when you need it it’s a pleasure to drive”

“Much improved from the last model especially handling and steering. Some problems with drivability due to the electronic throttle - hesitancy etc. Gearing is too tall especially considering it's a 6-speed box.”

“It exceeded our expectations (having thoroughly tried all the competition!). Mpg has varied on runs from 60 to 37 – the latter over 5,000 kilometres on a continental trip at speeds of up to 140mph and averages over 90mph! Incidentally, the return via Spain also proved the loading capacity: two adults plus luggage and 250 bottles wine plus half a pig and much more! Normal-hard-ish mixed driving UK is now 47mpg, - amazing. Don’t like the impeded rear view nor lack of hatch wiper. Getting used to the very high spec electronics /talking package!”

It hasn't been a vintage Driver Power year for Honda, as its best models have slipped down a few rungs in the top 100. But the firm has managed to hold on to its bronze medal position. Buyers can still expect first-class motoring, no matter which model they choose. Interestingly, the car maker's strongest suit was reliability, and Honda didn't finish lower than 11th in any one of the 10 categories.