We drive the new Hyundai i30 in the UK, and find this 1.0-litre turbo the pick of the range 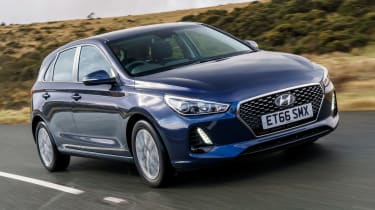 The Hyundai i30 is a step on from its predecessor, but that’s not enough in a class that’s also moved on. This 1.0-litre turbo is our pick of the range; it’s cheaper to run and more fun to drive than the 1.4 T, without losing much performance or refinement. Its problem is that capable rivals like the Vauxhall Astra and Renault Megane are slightly cheaper. Hyundai will have to work hard on finance deals if the i30 is to attract fresh buyers in a cut-throat market.

It’s always big news when a new family hatchback comes along, as despite the rise of SUVs, it remains one of the most popular types of car in the UK. Buyers love the mix of practicality, economy and driving fun you get with cars such as the Vauxhall Astra and VW Golf - and now there’s a new Hyundai i30 ready to take on the aforementioned establishment.

Cars like the Renault Megane and SEAT Leon prove that family cars needn’t be boring. Sadly that’s not quite the case with the i30. It’s better looking than before, with its large grille and sharp-looking head and tail-lights, but the overall design is still a bit dull. It just doesn’t stand out from the crowd. 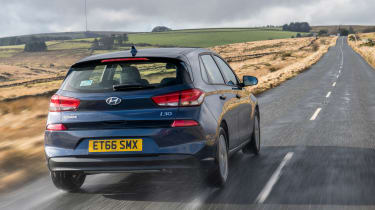 For some, that’ll be just what they’re looking for, however. The interior is classier than before as well, and the large eight-inch dashboard-mounted touchscreen gives the cabin a modern feel. Lower-spec cars get a smaller display, but SE Nav models and above user the sharper set-up, which is handily easy to use.

Some parts look a little cheap, such as the small dials for the heater controls and the plastics around the door bins, but on the whole the inside of the i30 is pretty good, if a little behind the best cars in this class. 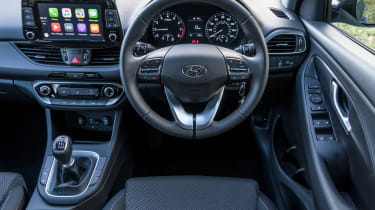 As is the trend these days, Hyundai has fitted the i30 with a turbocharged three-cylinder petrol engine - and it’s a great match. Performance is good, with 118bhp and 171Nm of torque, and while you can’t avoid the background thrum, the 1.0-litre petrol is surprisingly quiet under load.

The small petrol is flexible enough for high speed cruising as well as for nipping around town, and the same can be said about the i30’s handling. While it’s nowhere near the class leaders for fun on a twisty road, the steering has a natural weight to it and there’s plenty of grip.

The lighter front-end of the 1.0-litre model means it’s better to drive than the four-cylinder cars. The steering is still a bit numb, but it feels sharper, and the 16-inch wheels on our test car gave the i30 a softer edge than models fitted with larger 17-inch rims.

All models are comfortable, though, managing to glide over rough rural roads smoothly. A well-considered driving position, supple ride and refined cabin come together in the i30’s favour. It’s great on the motorway too, as the cabin stays nice and quiet even at 70mph. 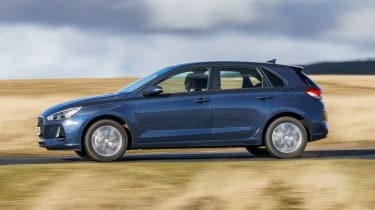 It’s not quite as comfy in the back, where taller passengers will feel a bit cramped - but the trade-off is that the boot is a generous size. At 395 litres with the seats up and 1,301 litres with them folded down, it’s bigger than that of a VW Golf.

Still, a Skoda Octavia not only has 590 litres of boot space, it’s much more spacious in the back as well. It’s more comfortable too, so if all you want is a spacious cruiser, the Skoda is a better bet. The VW Group 1.0-litre turbo is a gem, too.

The i30 is well equipped, and the SE Nav model we’ve tested here is a top choice - the eight-inch screen is a great addition, but you also get Android Auto and Apple CarPlay, DAB radio, wireless phone charging and loads of safety kit including auto emergency braking and lane departure warning.