The Hyundai Kona SUV gets a hybrid option to slot between its existing petrol and pure electric choices. Is this the sweet spot? 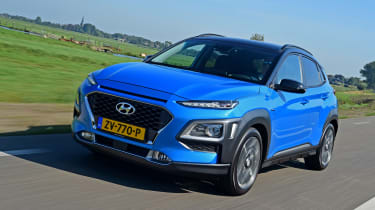 Now that Hyundai has dropped the Kona diesel, this Kona Hybrid is undoubtedly the most frugal combustion-engined variant in the range. The fully electric Kona aside, it’s possibly the best version, too. It’s not without its faults - the engine sounds rough and performance isn’t great - but the silent electric-only running means that this is a perfect crossover for city driving. We’d avoid the pricey top-spec model, but the Premium’s new infotainment system is a tempting step up from the base SE.

This is the Hyundai Kona Hybrid: a car which, while not offering anything revolutionary, might just come at the perfect time for the brand’s quirky compact crossover.

That’s because not long ago, Hyundai quietly dropped the Kona’s single diesel-powered engine option. While the loss of the diesel was no great tragedy in itself - the 1.6 CRDi lump was never one of our favourite engines anyway - it meant that the Kona has had to rely on a pair of fairly thirsty petrol-fuelled alternatives up until now.

Of course, eco-conscious drivers can still go for the all-electric Kona. But brilliant though it is, it costs £30,000-plus and is in such high demand that buyers currently have to wait for a year or so before taking delivery. 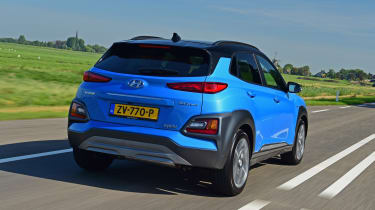 Which is where the Kona Hybrid model comes in. It starts from £22,495 in generously-equipped SE trim and, most importantly, it’s available to order now.

Under the skin, the Kona Hybrid borrows its petrol/electric setup from the Hyundai Ioniq Hybrid. In other words, a 1.6-litre petrol engine teams up with a 1.56kWh battery and a 32kw motor - allowing for emissions free driving over modest distances. Drive is sent to the front wheels only, via a six-speed dual clutch automatic gearbox.

On paper, it means that the Kona could potentially be much cheaper to run than its closest rivals. CO2 emissions range between 90-99g/km, placing the Kona in the 22-23 percent tax brackets for 2019/20. By contrast, the most efficient petrol SEAT Aronas sit at least three bands higher. A WLTP fuel economy figure of between 52.3 and 56.5mpg will also help keep more cash in your pocket. 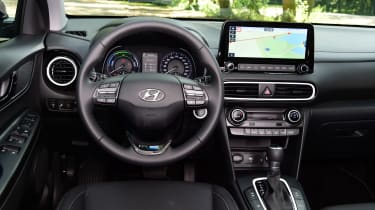 In reality, the Kona Hybrid’s drivetrain is hampered by the same issues as it encounters in the Ioniq Hybrid. That is a system which, despite the promise of 139bhp and a hefty 265nm of torque, always feels rather sluggish. Plant your foot to the floor and, once you’ve endured the enforced intermission while the slow-witted gearbox comes to its senses, you’re left with a loud, unpleasant drone from the petrol engine, without much in the way of forward motion to show for it. The 1.0-litre petrol unit offered in the Kona, though slower on paper, feels more lively - not least because of the manual gearbox it’s paired with.

But that 1.0-litre can’t compete with the Hybrid when it comes to fuel consumption. On our admittedly smooth, flat Dutch test route, the Hybrid managed an indicated 56.5mpg; the petrol will be lucky to achieve 40mpg in everyday driving. Given the route mainly covered motorways and country roads, we’d expect better numbers if you covered more town miles, where the electric drive should intervene more frequently. However, if fuel consumption matters most with your hybrid, a Toyota Prius is still the best bet.

The rest of the Hybrid’s driving experience is the same story you’ll find across the rest of the Kona range: a Citroen C3 Aircross is more comfy, and a SEAT Arona is more fun. But the Kona goes around corners well enough for most buyers and, save for the jiggly ride on the larger alloy wheels, it rides okay. It’s just not setting any class standards.

Save for some special badging and a unique pair of alloy wheel designs (16-inch items for SE models; 18-inches for the rest of the lineup) there’s little to separate the Hybrid from the rest of the Kona family. Customisation is one of the Kona’s strong points, with buyers able to choose from one of 26 different exterior colour combinations once the contrasting roof finishes are taken into account.

Look beyond some new bits of white trim that surround the gear selector and air vents, and there’s a more significant change on the inside. Hyundai has equipped the Kona with a refreshed infotainment system. The new unit’s screen measures 10.25 inches and uses a much wider aspect ratio than the previous system. This, combined with increased resolution, allows the display to provide a split screen mode, so navigation and entertainment functions can both be seen at the same time. The user interface and graphics haven’t radically changed from before, but that’s no bad thing: though not quite as fancy as VW group systems, it’s a well-designed and neat-looking arrangement. Physical shortcut keys along the bottom of the screen make navigating around the menus a doddle.

The new infotainment screen itself is available on Premium and Premium SE variants - the entry level SE makes do with a seven-inch touchscreen. However, the smaller display still gets Android Auto, Apple CarPlay and a reversing camera bundled in.

The Premium SE sits at the top of the range. This trim level adds both the stuff that will potentially come in handy (LED head and tail lights) with the kit that’s nice to have, but not vital (a head-up display and leather seats that are heated, ventilated and electrically adjustable). However, at £27,195, it’s pricey for a car in this segment.