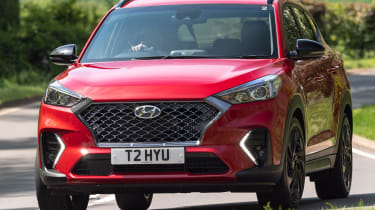 The Tucson N Line’s minor tweaks were never going to transform the car into a sports SUV. However, take it for what it is – a capable family SUV with a smart body kit – and there’s plenty to like. As before, it doesn’t lead the class in any one area, but this is arguably the most desirable trim level Hyundai’s crossover now has to offer. While the petrol is nippy but thirsty, the new mild hybrid diesel’s low CO2 ratings will make plenty of sense to company car drivers and private buyers alike.

This is the Tucson N Line, the second Hyundai after the i30 to receive the brand’s hot N brand-inspired treatment. It follows a similar vein to the other sporty trim levels offered on rivals like the Volkswagen Tiguan (R-Line), Ford Kuga (ST-Line) and Renault Kadjar (GT Line).

Like those cars, the Tucson gets a few choice sporty upgrades without adding performance car insurance bills. Starting from £25,995, the N Line slots into the Tucson range at roughly the same price of our current pick, the SE Nav, and below the posher Premium trim.

On the outside, the N Line gets a unique look to spice it up compared with the rest of the Tucson range. The front gets a smart-looking bumper design which, like its i30 N Line cousin, features little ‘shark tooth’ elements poking up from the front splitter. There’s a grille insert that matches i30 N Line’s smoked metallic design, too, as well as some boomerang-shaped LED daytime running lights. Extra sporting intent is added with a contrasting black finish for the door mirrors, roof, extended rear spoiler and new 19-inch wheels.

Inside, there's extra red trim to perk up an otherwise uniformly black cabin. The seats are trimmed in a mix of fake leather and Alcantara-esque materials. Go for a manual gearbox and the gear knob is the same as the one that you get in the i30N hot hatch. Equipment levels give you everything you really need: heated front seats, keyless entry, climate control, front/rear parking sensors and privacy glass are all standard.

Elsewhere, the interior is the same as in any other Tucson. The dashboard layout is functional rather than particularly interesting, build quality is perfectly fine, and the eight-inch touchscreen infotainment system is clearly laid out and easy to use – if a little slow to respond to touches. Rear cabin space isn’t the best in the class, and the rear centre seat is firm and too narrow for an adult. 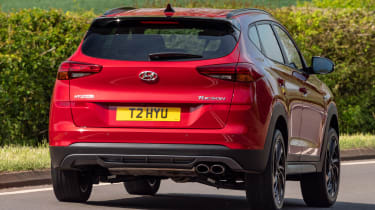 UK buyers will have two engines to choose from, one of which is new to the range. The 134bhp 1.6-litre diesel used previously has been revamped with a mild-hybrid setup; the 48-volt electrical system recoups energy under braking, which it stores in a small 0.44kWh battery. Under acceleration, it deploys up to 16bhp to reduce load on the diesel engine.

In practice, the effects of the hybrid system are pretty subtle. The most noticeable difference is that the start/stop system is more keen to engage; dip the clutch while braking to a halt and the engine can cut out at around 20mph. Move off, and the engine is much quicker to fire back into life, too.

With the electric boost there to take the load off the engine rather than boosting outright speed, performance is unchanged – so it’s a little below average for the class. Refinement is fine too, but this 1.6 is a little more audible than the larger 2.0-litre diesel (with a similar 48-volt setup) that’s offered in the Premium and Premium SE cars.

However, the diesel hybrid doesn’t get the uprated N Line suspension – for that you need to go to for the 1.6-litre turbocharged petrol engine. It’s a tried and tested engine in the Tucson; the 175bhp unit provides enthusiastic performance, especially compared to the class standard. It even sounds reasonable under hard acceleration, yet settles down nicely at a cruise. 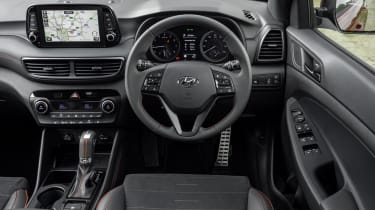 The suspension changes themselves aren’t radical: the N Line is eight per cent stiffer at the front and five per cent at the rear. Push hard and it feels marginally sharper and more playful than the standard car, without any noticeable trade-off in ride comfort. Given that the Tucson is at the smoother end of the class comfort-wise, it remains a relaxing place to while away the miles.

Both petrol and diesel models are available with a choice of six-speed manual or seven-speed dual clutch automatic. In both cases, we’d pick the manual: it’s a fairly pleasing shift – helped by that i30 N gear knob which is lovely to hold. The auto, on the other hand, is laggy, easily confused and costs £1,290 more. For a car with sporty overtones, it’s a shame there aren’t any steering wheel-mounted paddles to play with, either.

But what of the fuel consumption? Officially, the new engine achieves 50.4mpg as a manual and 48.7mpg for the auto on the new WLTP test cycle - both a few miles per gallon better than before. It also manages to fairly comprehensive slash emissions figures relative to the old non-hybrid diesel: 113g/km is 12g/km lower than the best that its predecessor had to offer. For BIK users, that’s a drop of four bands, from 33 per cent to 30 per cent. 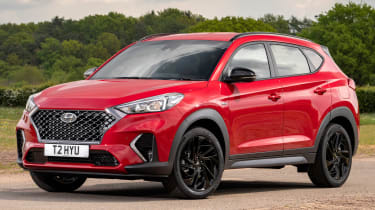 The petrol model remains as thirsty as ever, though: on our encounter, the 36.2mpg WLTP figure still seems a little optimistic in the real world. For comparison, a similarly-performing Skoda Karoq will get closer to 40mpg.