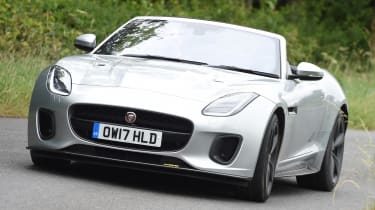 Some buyers will find real appeal in the F-Type 400 Sport’s combination of limited-run exclusivity, shattering pace and that raucous V6 soundtrack. However, it costs nearly £6,000 more than the 375bhp R-Dynamic, which is almost as powerful and, frankly, every bit as fast on UK roads. We’d be tempted to save the extra cash and spend it instead on a few optional extras for the car and a couple of decent track days.

The supercharged V6 version of Jaguar’s F-Type never really seemed like a car that was short of performance.

But somebody at the firm clearly thinks the gap between the basic cars and its V8 range-topper is a bit too big. This model, the limited-run 400 Sport, sits as a halfway house between the two variants.

The 400 Sport will be sold for the 2018 model year only, offering an additional 20bhp over the 375bhp R-Dynamic model. 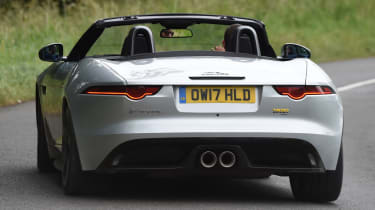 The chassis gets a mild upgrade, too, with enhanced configurable dynamics and Jaguar’s Super Performance braking system, which brings 380mm discs to the front and 376mm items at the rear. You can spec the car with rear or four-wheel drive, but it’s only available with an eight-speed auto box.

On the face of it, there’s little tangible benefit to the 400 Sport’s extra grunt; the official 0-62mph time is exactly the same as the R-Dynamic model’s (4.9 seconds), while top speed remains at 171mph. 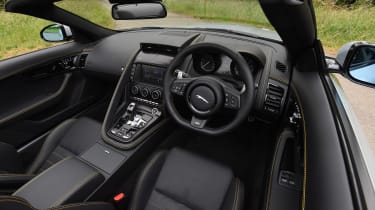 That familiarity carries through to the road, where the 400 Sport feels only slightly different from the more modest V6 variants. That is to say it is brutally fast, to the point where really exploiting the top end of the performance will have you breaking the speed limit in a matter of seconds.

In fact, the only place you can truly tap into the extra power is on the track, where you’ll be able to take advantage of the 400’s biggest discernible difference over the regular V6 models: its brakes. They have a pleasing bite to them, and even in the heftier Convertible we tried show decent resistance to fade. The rest of the package is as strong as ever, with engaging, precise steering and a gearbox that quick-shifts well in manual mode, and accurately second-guesses your intentions in auto. 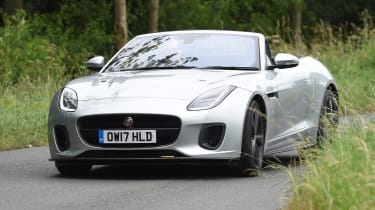 The engine is every bit the hooligan, roaring on start-up and then popping and crackling when you lift off the throttle. Down sides? The F-Type still isn’t as agile as a Porsche 911 or 718 Boxster, and the ride on the standard 20-inch wheels is at the very limit of what we’d call tolerably comfortable.

Other than the new rims, the only other visual cues are the 400 Sport logos. But perhaps the most novel feature is ReRun, a video app designed for track day use. We first tried it on the updated F-Type SVR, but it’s now rolling out across the range.