Can the four-cylinder Jaguar F-Type beat the Porsche 718 Cayman turbo in an ‘accessible’ sports car battle? 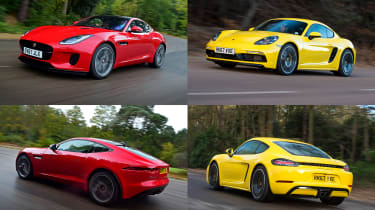 The Jaguar F-Type launched in 2013 with a choice of rip-snorting V8 or sonorous V6 supercharged engines. In the five years since, Jaguar has introduced four-wheel drive and a hardcore high-performance SVR flagship model, but there has also been a recent addition at the lower end of the line-up to further the F-Type’s appeal.

This 2.0-litre four-cylinder turbocharged version drops the car’s price to an even more (relatively) affordable £50,795 for the entry-level rear-wheel-drive 2.0 i4 automatic.

But putting a lower-capacity turbocharged petrol engine in the finely styled nose of the F-Type Coupe means it faces competition from arguably the best sporty two-door in the business: the Porsche 718 Cayman, which adopted four-cylinder power back in 2016. In a head-to-head fight, which emerges victorious? 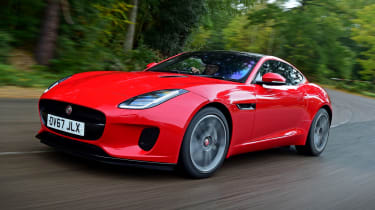 With the arrival of the 2.0-litre Ingenium turbo engine in Jaguars like the XE and XF saloons, it was only a matter of time before a tuned version found its way into the F-Type.

We’re used to seeing the sports car with a V6 or a V8 bolstered by a supercharger, and no matter what the configuration, those engines are a key source of the two-door’s character.

But even in P300 2.0 i4 spec, the car still has plenty of personality, only its character is now subtly different. It’s not rabid – far from it, in fact – and to some people on first impressions it may feel a little undernourished in the engine bay. 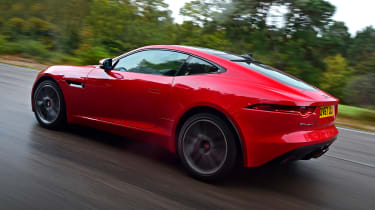 It starts with a flat tone and doesn’t feel very special when cruising around. It’s unobtrusive, due to the chassis modifications that have been made as well. Yet select Dynamic and goad the engine with revs, and it starts to come alive. It’s not the most cultured sound, but next to the 718 it’s pleasant. With the switchable exhaust on it has presence and pops and bangs when you lift off.

The engine pulls cleanly thanks to a decent spread of torque, with the twin-scroll turbo ensuring a maximum 400Nm is available from just 1,500rpm. But at 1,525kg it’s far heavier than the 1,385kg Cayman, which you notice instantly.

At our track the Jag covered 0-60mph in 5.9 seconds, trailing the 718 by two seconds. While its conventional eight-speed auto has one more ratio, the Jag couldn’t match the lighter, more powerful Porsche in gear, either. From 50-70mph in sixth, the F-Type was nine tenths slower.

But the car is about more than just straight-line performance. The four-cylinder engine means the nose is much lighter than in its V6 and V8-engined cousins, which also ensures the Jag turns in with keen response. 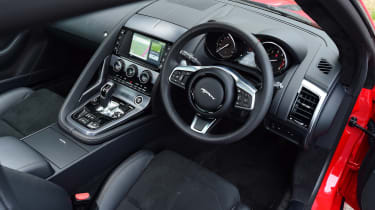 You can place a good deal of faith in the level of grip offered by the front tyres as a result – and most drivers will find there’s plenty.

Still, not much detail is relayed through the steering and you get a springy feeling of resistance as in other F-Types. But this car can raise a smile, even if it doesn’t break away or drive with the progression of the Porsche.

Engineers have recalibrated the chassis, with softer springs front and rear, while the dampers incorporate know-how from the hardcore SVR. These tweaks are noticeable on rough roads as the car rides with a good level of grace – and it’s this that helps deliver a welcome positive in the F-Type. It offers a good degree of comfort where the Cayman feels firmer more of the time. 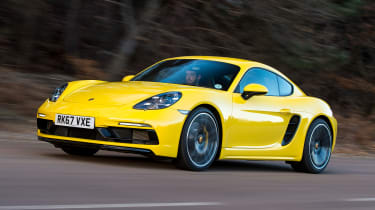 A move to a flat-four turbo undoubtedly removed some of the character of the old naturally aspirated flat-six Cayman, but the 718 is here to stay and, objectively, it’s a clear step on.

Take the 0-60mph time we recorded at our test track. Our PDK model was also equipped with Porsche’s £1,574 Sport Chrono pack, so with launch control it sprinted from 0-60mph in just 3.9 seconds – an incredible level of pace.

It also had the edge over the F-Type when it came to in-gear performance, despite having one fewer ratio to cover a wider speed range. 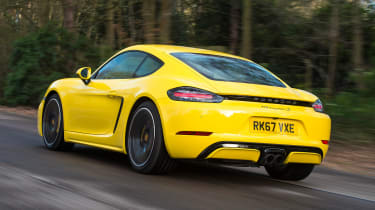 With more power and torque than the Jag, at 345bhp and 420Nm respectively, plus less mass to move, it’s no surprise that the 718 delivers a stronger hit of acceleration. In Sport Plus mode the torque ramps up swiftly low down, with its peak hitting at 1,900rpm. From here the car revs harder and with more urgency than the Jaguar, while the PDK box serves up sharp and near-seamless shifts – which is partly where the Cayman asserts its authority over the F-Type.

The steering has a similar weight but a more transparent feel, so it gives you confidence in the Cayman’s front end to push into bends. Do so and you’ll uncover the car’s beautiful natural balance.

It’s keen to change direction, with the mid-engined layout helping to boost agility. There’s colossal grip, yet you can revel in the adjustability without having to push up to – or past – the limit.

However, this dynamic prowess does have its downsides. While body control is brilliant, reining in the energy at high speed well, even with the £1,010 adaptive dampers in the Normal setting, the Porsche rides with a firm edge where the Jaguar feels a little softer and looser. It’s not too uncomfortable, but you’ll have to put up with a little more vertical movement in the seat if you want the thrills on a twisting road. 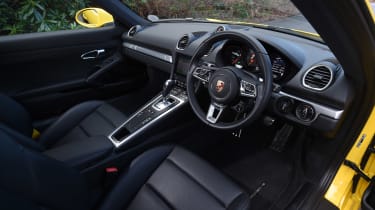 Tyre roar is intrusive, but at least it drowns out some of the engine’s less-than-musical note. It thrums at low revs and drones on the move; not an unpleasant sound, just not as crisp as the Jag’s.

Still, the cabin is built from higher-quality materials. Despite a slight price advantage, the Porsche has more of a premium feel, partly due to the more advanced infotainment set-up. You also get sat-nav, Apple CarPlay, connected services, DAB, Bluetooth, part-leather electric sports seats and 19-inch alloys. Xenon headlights are standard (LEDs to match the Jag cost £1,397), while keyless entry and go is £497, rear parking sensors £362 and a sports exhaust £1,380. 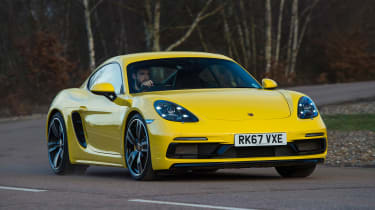 Even though its engine lacks some character, there’s no denying the Porsche’s savage performance. It comprehensively beats the Jag for speed, handling and balance, plus it’s a little more usable. While it costs more to run, it’s cheaper to buy on PCP. 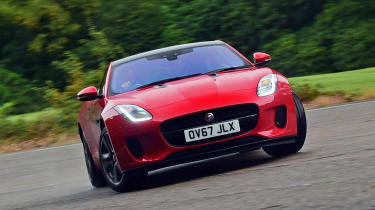 The P300 broadens the Jag’s appeal and brings it within reach of a new group of buyers. It looks great, handles sweetly and is quick enough, but still isn’t as engaging or, surprisingly, practical as the Porsche. It’s well executed, but this F-Type isn’t as charismatic as we’ve come to expect.