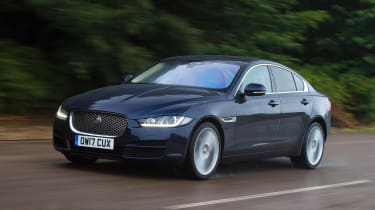 Before now, there wasn’t much to recommend the entry-level 2.0-litre petrol version of the XE, but that has all changed for the 2018 model year. The new 197bhp engine is stronger, more economical and cleaner, and is a perfect match for the Jaguar’s sweet chassis and fun handling. The diesels do make a little more sense, even if they are less refined, but at last you can confidently buy a 2.0-litre petrol XE and not feel disappointed.

It’s hard to believe it’s been two years since the Jaguar XE burst on to the compact executive scene waving the Union Flag with pride. But the most important Jag in a generation has passed its second birthday, and in this time it has picked up three Auto Express awards and firmly banished memories of the X-Type.

Back in 2015 the XE was launched with just a small handful of engines, with the big news being the new Wolverhampton-built Ingenium four-cylinder diesels. The rest of the range were Ford-related petrols.

Now, though, the line-up has widened and the 2.0-litre blue oval turbo petrol has been quietly replaced with a new Ingenium unit – and this is our first drive of it. It’s the same cubic capacity as the old Ford motor and makes the same amount of power; it’s badged in the continental style of ‘200PS’, but it’s 197bhp in old English. The engine is also hooked up to an eight-speed automatic box, just like before. Yet that’s where the similarities stop because the new engine is better in every way. 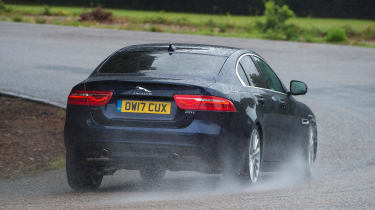 Firstly, the numbers. There’s 40Nm more torque with the new 2.0-litre. It doesn’t sound a lot, but it makes a huge amount of difference with in-gear acceleration; as a result, the XE is now over half a second quicker from 0-60mph, taking 6.7 seconds. The new engine is also more economical (45.1mpg vs 37.7mpg), as well as much cleaner, emitting 144g/km of CO2 against 179g/km. This finally means the Jag 2.0 is comparable with German and Italian rivals.

On the road the news is even better. Before the old 2.0-litre felt lethargic and wasn’t well matched to the gearbox, but the new engine revs cleanly and is far better suited to the auto. Changes are smoother than before and also as quick as in a BMW 320i. There’s even a slightly rorty sound, although if you switch to ‘Dynamic’ mode the engine is a little coarse at the rev limiter.

The new motor is also noticeably quieter and smoother when cruising compared with the old 2.0 and the XE’s 2.0 diesels. You don’t get the same level of punch as from the Ingenium 180 diesel, although it’s more refined and a good match to the Jag’s sweet and balanced rear-wheel-drive handling, and crisp steering and turn-in.

The new engine also sweeps in a raft of new tweaks and improvements to the XE. While the car of two years ago was slightly rough round the edges, the new 2018 models have interiors that are better screwed together, ride slightly better and generally better reflect their price tags.

There’s more tech than before, too. Our car had a new 12.3-inch instrument cluster, and while it’s not as impressive as an Audi A4’s Virtual Cockpit, it provides the XE with a much-needed dose of modernity. There’s also a dual-screen infotainment system fitted in the centre of the dash and a powered and gesture-controlled bootlid. 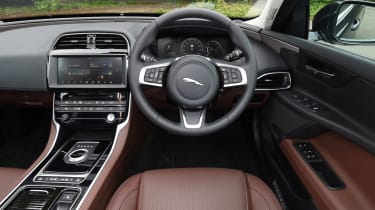 Slightly cramped rear seats and an awkwardly shaped boot remain, though, so if space is an absolute priority an A4 is still a better buy.