Jaguar's XF is setting a high standard in the executive saloon class, even in economical 2.0d guise 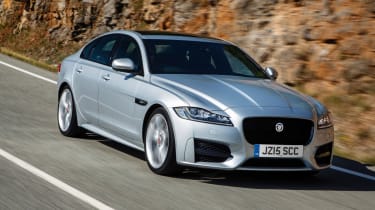 This model is likely to be one of the most popular in the new Jaguar XF range and rightly so – it’s brilliant. We love its blend of comfort and sportiness, its efficiency and performance. The only minor gripes are that the interior isn’t quite at Audi levels, and the infotainment still lacks Apple CarPlay or Android Auto. Even so, it’s our current pick of the executive car crop.

You wait for a new executive challenger for years, then three turn up all at once. Well, almost. The new Jaguar XF is now in the UK, the new Mercedes E-Class turns up soon and a new BMW 5 Series arrives at the end of the year.

If you have to buy now, the new Jag makes a fine choice and, for now, tops the class. It may look a little too much like a stretched XE, but this all-new mostly aluminium model is even better than it’s smaller brother.

Jaguar has taken what was good about the old car: its blend of confidence-inspiring handling and a cosseting ride, theatrical interior and individual style and improved on all those. It’s also addressed the lack of space and outdated infotainment to become class best in the former and competitive in the latter. 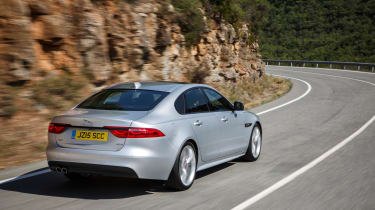 There’s also Jaguar’s highly-praised 2.0-litre diesel under the bonnet. It’s the Ingenium four-cylinder diesel first seen in the smaller XE, and is available with the same choice of 161bhp or 178bhp power outputs. Here we try the more potent version in racy R-Sport guise.

It’s a tad gruff at times, but revs sweetly and is pokey enough responding swiftly to a prod of the throttle. This feeling of effortless acceleration is enhanced by the eight-speed automatic box (there’s also a six-speed manual that’ll save you £1,750). In auto mode it delivers slick shifts and responds promptly to the throttle. Squeeze the pedal a bit harder and it holds on to a gear for stronger acceleration; give it a little lift and the transmission changes up seamlessly. You can also take manual control using the steering wheel-mounted paddles.

Like other XFs, the 2.0d’s steering is quick and precise, boosting the feeling of agility as you turn into a bend. More powerful R-Sport models like our test car get slightly stiffer suspension that’s designed to reduce roll and improve body control. Yet despite a slightly firmer low-speed ride, the car feels almost exactly the same to drive as less sporty versions. That means you get strong grip and excellent composure – for such a big saloon, through a series of corners the XF feels remarkably nimble. It’s refined, too. 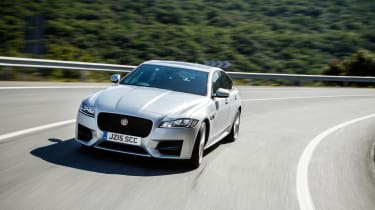 Wind and road noise are well suppressed, while on the motorway the 2.0-litre diesel is barely audible. And once you’ve got past the suspension’s low-speed fidget, the Jag glides quietly over most bumps and potholes.

Elsewhere, the 2.0d is virtually identical to the more expensive V6 diesel. On R-Sport models, that means you get the same deeper bumpers, subtle side skirts, tailgate spoiler and 18-inch alloys – the 161bhp version comes with smaller 17-inch rims.

Where the 2.0-litre car differs from its six-cylinder brother is in its low running costs. Go for the 161bhp version with a manual box, and you’ll benefit from CO2 emissions of just 104g/km and a claimed 70.6mpg. The more powerful 178bhp model tested here emits 114g/km and returns 65.7mpg – virtually identical to a 520d’s figures, but slightly higher than an A6 2.0 TDI Ultra’s. 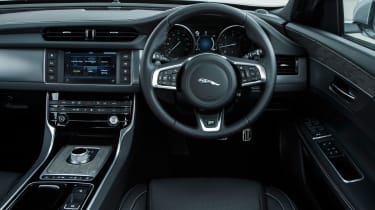 It’s a similar story inside, where the car has the same mix of soft leather for the seats and aluminium-effect trim inserts. Some of the materials feel a little cheap compared to those inside a BMW 5 Series, but the Jag is solidly built and has a classy look and feel. Also familiar is the cabin’s cosy and cosseting air, created by the small side windows and wide centre console. Yet there’s a surprising amount of space, with plenty of rear head and legroom.

So for now, the XF sits at the top of the class. But it’ll be doing brilliantly if it’s still there at the end of the year.