The Kia Niro is the new hybrid rival to the Toyota Prius, but does it makes sense in more basic 2 spec? 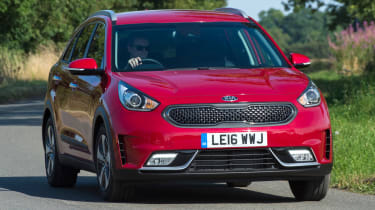 This mid-spec 2 model is arguably the pick of the Niro line-up, as it combines an attractive price, low running costs and a decent amount of standard kit. The Kia’s hybrid drivetrain isn’t as smooth or refined as the latest Prius’s, but it delivers an acceptable blend of performance and economy. Factor in the spacious cabin, and the sensible Niro is a fine family car choice for buyers who don’t want to shout about their eco-friendly credentials.

Hybrid technology has been around for decades, so there’s no denying that Kia has arrived a little late to the party with its Niro. Yet the petrol-electric model is aiming to stand out from the crowd with a blend of affordability and ease of use.

Unlike models such as the Toyota Prius, the Niro isn’t attempting to emphasise its eco-friendly credentials with bold styling and a futuristic interior. Instead, Kia has taken a more low-key approach, and delivered a traditional crossover hatchback model that just so happens to have hybrid underpinnings. We’re already impressed by the flagship 3 model, but does the cleaner, cheaper 2 make more sense? 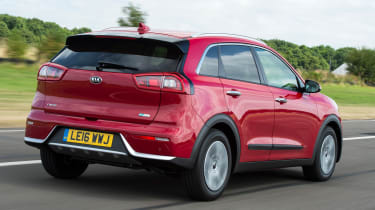 Externally, the mid-spec 2 is identified by its traditional halogen headlights and smaller 16-inch alloy wheels. Although they look a little lost inside the Niro’s rugged plastic wheelarch trims, they do help lower aerodynamic drag and reduce CO2 emissions to 88g/km. That’s some way short of the Prius’s eye-catching 70g/km figure, but it does mean that the Niro 2 qualifies for free road tax. Also, company car drivers will save as a result of the 2’s Benefit in Kind rating dropping to 15 per cent.

Climb aboard and the 2 gets the same smart, well built and roomy cabin as the range-topping 3, although luxurious additions such as the leather-trimmed, heated and powered seats have been replaced by manually adjusted part-leather versions. Standard kit extends to sat-nav, a seven-inch touchscreen infotainment system and dual-zone climate control.

Twist the key in the ignition and you get typical hybrid silence from the Niro’s powerplant. Engage Drive, squeeze the throttle gently and the Kia eases forward using electric power alone. However, press the accelerator pedal a little harder and the 104bhp 1.6-litre petrol engine bursts noisily into life in an effort to provide an extra burst of acceleration. Fortunately, the four-cylinder unit is fairly refined at normal speeds, only becoming coarse and intrusive when worked really hard to access the car’s combined 141bhp output.

Sport mode sharpens the throttle response and adds weight to the electrically assisted steering, but even in this setting, the Niro feels brisk rather than quick. The main difference between the Kia and its hybrid rivals is the use of a six-speed twin-clutch gearbox, rather than a continuously variable transmission (CVT). 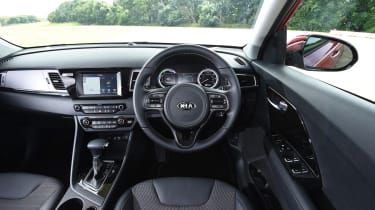 The set-up works well, particularly when you want a quick burst of acceleration, as the gearbox remains in sixth while the electric motor assists the internal combustion unit to boost torque. In similar circumstances, most cars with a CVT box send the engine revs soaring uncomfortably high. However, the Kia’s gearbox is less impressive at low speeds, where you can sense that the gearbox, engine and electric motor are slightly out of sync, resulting in surprisingly ponderous changes.

On the plus side, if there’s more than 50 per cent charge in the lithium polymer battery, then for short periods the Niro will cruise at surprisingly high speeds on electric power alone. In all other respects, the Kia is smooth and easy to drive. The steering is lifeless, but it’s light and direct, making it a doddle to place on the road. More impressively, the Niro delivers decent composure through a series of bends despite its rather hefty 1,556kg kerbweight.

The trade-off for the safe and secure handling is a rather firm ride. Still, the suspension operates quietly, plus wind and road noise are well suppressed.