New baby aims to bridge gap to the class leaders 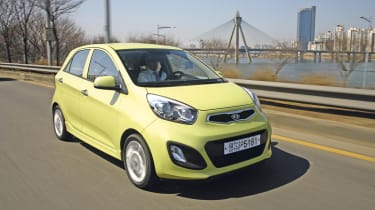 Kia has succeeded in moving the Picanto upmarket. The driving experience is much more mature than before, with improved refinement, while buyers can choose from a wide and impressive range of equipment and customisation options. The new look, inside and out, adds to the appeal, and if Kia can price it right, the Picanto could be a serious challenger to the established Ford Ka and Fiat 500.

The only way is up for Kia! Fresh from shocking the SUV class  with the excellent Sportage, the company has its sights set on another crucial sector – the city car market. And it’s taking its smallest model, the Picanto, up in the world. A three-door version arrives in September, but we  got our hands on this five-door due in June. So how good is it?
While the previous car had  a budget feel, you can’t say the same of the new one. Bold, chunky styling and sculpted lines help  to create a premium look, as do the optional LED headlights  and tail-lamps. Inside, there’s  a classy layout with materials  that now at least look expensive, even if they can feel a bit  scratchy on further inspection.

Video: watch CarBuyer's video review of the Kia Picanto
[[{"type":"media","view_mode":"content_narrow","fid":"68674","attributes":{"alt":"","class":"media-image"}}]]
There’s also a range of  premium options and standard equipment, including electric windows all-round, Bluetooth and steering wheel-mounted controls. A heated steering wheel, heated seats, rear parking sensors and keyless go are offered, too.
But the big question is,  how does it fare on the road?  We drove the 84bhp 1.25-litre and 68bhp 1.0-litre petrol cars and both impressed, providing smooth and quiet progress.
Yet unless you’re on a strict budget, we’d recommend the 1.25-litre unit, fitted with the optional ISG stop-start system. This reduces CO2 emissions from 105g/km to 100g/km, and means the car is exempt from road tax and the London Congestion Charge. Plus, it claims 66mpg fuel economy.
Unlike the smaller 1.0-litre,  the 1.25-litre Picanto doesn’t struggle to overtake at motorway speeds. And you won’t have to change down a couple of gears when negotiating steep hills.
The difference in performance is highlighted by the 0-62mph times: the 1.0 completes the sprint in 14.4 seconds, and the 1.25 takes 11.4 seconds. Yet the three seconds 1.0-litre buyers lose in acceleration aren’t really compensated for by the 1mpg and 5g/km improvements in emissions and fuel economy – although they’ll miss out on the playful three-cylinder thrum.
Still, whichever model you  choose, you’ll be impressed  by the Picanto’s mature driving experience. This is characterised by a comfortable ride quality  and decent sound deadening.
In corners, the steering is  light and responsive, if short  on feedback. Body roll is well controlled, but the front tyres  are quick to lose grip. Practicality is better than ever, as the new model is larger than before.
Its boot is nearly a third bigger, with a 200-litre capacity, and  the front passenger gets more room. Adults can fit in the back, although it’s a bit of a squeeze.
Yet despite the improvements, plus the upmarket new image, Kia hopes to retain a great-value price tag, with the range starting at a little more than £8,000.
Share this on TwitterShare this on FacebookEmail