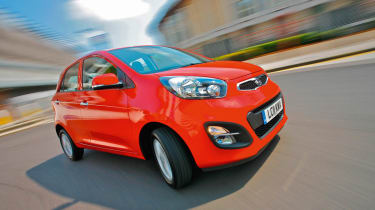 The new Picanto improves in all areas, without forgetting the basic but important needs of city car drivers. So it’s more spacious, without being too long, and classier inside, without becoming too pricey. Buyers might not want to pay more than £10,000 for the 1.25-litre version, but the cheaper 1.0-litre is fine for suburban and city use, and will win plenty of fans for avoiding annual road tax, too.

At the height of the Scrappage Scheme, the Kia Picanto was Britain’s cheapest car, costing only £4,195 with the £2,000 Government discount. But that model is now on its way out, to be replaced in June by one that bosses claim goes beyond cheap and cheerful. Are they right? We drove one of the first UK cars to find out.
Happily, the new version is still good value. Prices start at just under £8,000 for the entry ‘1’ model, which undercuts most city car rivals, including the Fiat Panda, Citroen C1 and Renault Twingo.
Video: watch CarBuyer's video review of the Kia Picanto
[[{"type":"media","view_mode":"content_narrow","fid":"68674","attributes":{"alt":"","class":"media-image"}}]]
The kit count isn’t bad, either, with electric front windows, remote central locking, electronic stability control and hill start assist as standard.

The car even costs less to run than the old model. Smaller of the two, all-new petrol engines is the 70bhp 1.0-litre three-cylinder, which returns 67mpg. It emits only 99g/km, so the Picanto is one of the cheapest cars to avoid annual road tax.
Also ducking the tax is the new 84bhp 1.25-litre four-cylinder engine, which in EcoDynamics spec with stop-start and regenerative braking is bang on the 100g/km figure. That model costs just over £10,000, but the price hike does bring you extra power and smoothness over the 1.0-litre, and is preferable if you frequently drive on motorways.
The smaller unit is energetic enough for most drivers, but that three-cylinder thrum becomes tiring at 70mph, while the car we drove had a separate rattle from behind the dash. However, both models are more civilised thanthe previous version, with wind noise reduced and much less crashing over potholes and other road imperfections.
In fact, the ride is impressive, while body roll in corners is well contained.
Driven back-to-back, you notice the softer suspension at the front of the 1.0-litre car, as a result of the smaller engine. The steering is also lighter and more precise than on the 1.25-litre model, in which the effect of Kia’s new power-assisted set-up is magnified. This only offers help when needed, to reduce energy drain. Aside from that underlying lumpiness, it’s mostly precise and well weighted, especially at motorway speeds.
The new car is only 60mm longer than the old one, but it feels much more spacious. The boot, for example, expands to a useful 200 litres, up from 157 litres in the previous model. And in the five-door version (a three-door follows in October), there’s room for a six-footer to sit in the back behind someone equally tall.
We were also impressed with the dash, which is well laid out and uses decent plastics. Under the integrated stereo, the heater and ventilation adjustment wheels have a quality feel, and there’s a handy cubby with twin cup-holders in the ‘2’ spec car.
This version comes with plenty of gadgets, including Bluetooth connectivity, manual air-con, heated mirrors, and USB/aux-in sockets. It also gets some extra chrome detailing outside. The 1.25 ‘3’ spec at £11,195 is venturing into territory occupied by the Fiat 500 and MINI, but offers 3D-effect LED lights front and rear, heated front seats and 15-inch alloy wheels. It all adds up to make an impressive small car.
Share this on TwitterShare this on FacebookEmail