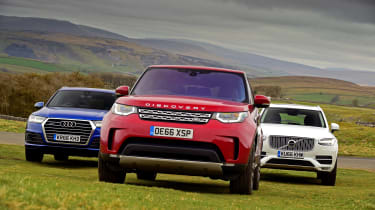 The Land Rover Discovery was arguably the world’s first luxury seven-seat SUV. It’s amassed an army of fans over nearly 30 years, but by early 2017 the fourth-generation Discovery was feeling a little long in the tooth. However, the all-new Discovery Mk5 is set to change that.

Land Rover’s large off-roader is more competitive than ever, and it’s aiming to go straight to the top of the class. But to do so, it must conquer a former Auto Express Car of the Year in the form of the stylish and suave Volvo XC90, as well as Audi’s sporty Q7. This is one of the most demanding market sectors, because seven-seat SUVs need to combine luxury, practicality, performance and tech – and we know that the Land Rover’s rivals will give it a stern test.

However, this latest Discovery sports some innovative features that could promote it to pole position in the class. Is it good enough to beat the best? 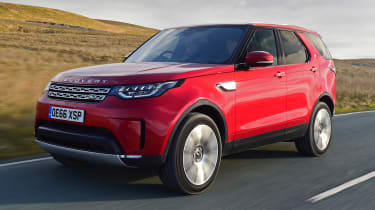 In the Land Rover Discovery’s lifespan there have only been four versions, so this all-new fifth-generation car is a major chapter in the story. Our pictures show a top-spec HSE Luxury model, but the car we’re testing is one step down the ladder: the £57,495 Land Rover Discovery 2.0 Sd4 HSE.

The new Discovery is lighter than its predecessor, but it’s still on the heavy side so it isn’t particularly agile. The steering is also slow, and the car doesn’t grip around corners as strongly as the XC90, or the Q7 in particular. 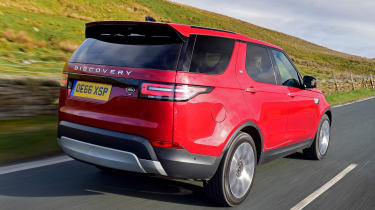 However, the Land Rover is set up for comfort. Our car’s large 21-inch wheels caused a slight jiggle over harsher bumps, but in the most part the Discovery’s ride is smooth, flowing over the road and gently damping body and wheel motion.

This isn’t the only part of the car’s impressive refinement, though. Wind and road noise are kept in check nicely, while the four-cylinder diesel doesn’t grumble too much. It’s a twin-turbo unit that produces 237bhp and 500Nm of torque, and only under hard acceleration does the diesel growl become intrusive. The eight-speed auto changes smoothly. 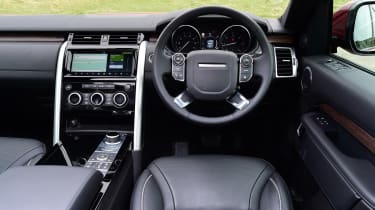 Despite the weight saving, this is still not a fast car. At our track the 0-60mph sprint took 9.5 seconds, which was a full 3.2 seconds slower than the Q7, while its in-gear performance wasn’t as impressive as the lighter, punchier Audi or the Volvo – although outright performance isn’t as important here.

Land Rover’s Terrain Response 2 system eclipses the others’ for off-road performance, while on road it has the measure of its rivals for luxury and comfort.

Testers’ notes: “Luxury options mean you really can turn the Discovery into a Range Rover rival with seven seats. It makes the Range Rover Sport seem like the odd one out in Land Rover’s line-up.”

Audi’s second-generation, seven-seat SUV built on the success of the original Q7, and is known for its strong dynamics. However, space, practicality and luxury are major factors here, so can the Q7 – which we test in £55,590 S line trim with Audi’s higher-powered 3.0 V6 TDI – rival the Land Rover?

Under the Audi’s bonnet lies a 3.0-litre V6 turbodiesel engine. It’s available in two tunes, and we’re testing the higher-powered 268bhp model here. It also produces 600Nm of torque, which is 100Nm more than the Discovery’s 2.0-litre engine. 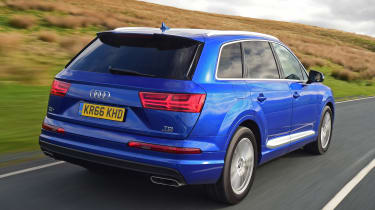 Its advantage showed at the test track, where the Q7 sprinted from 0-60mph in an impressive 6.3 seconds. It also had the edge over both of its rivals in every gear other than eighth. However, as with the Discovery, its refinement is arguably more important than outright speed. 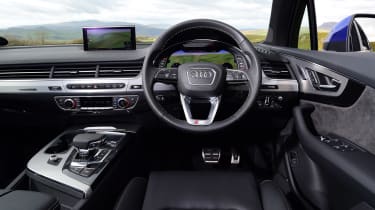 On our test car’s adaptive air-suspension the ride is very nearly as refined and as comfortable as the Land Rover’s, but this was helped by the smaller wheels and taller tyres fitted to our car. This meant bumps were absorbed nicely, although the tauter damping still gives good body control. For a large off-roader there’s lots of grip, and the steering is much quicker and more precise than either the Land Rover’s or Volvo’s. And while the Q7 is very capable, it’s also a relaxed long-distance companion.

Testers’ notes: “The Q7 is agile and the £1,100 all-wheel steering option enhances this. Whereas its rivals use four-wheel drive to help off road, the Q7 feels more tuned for fun on it.”

When it was launched in 2015, the Volvo XC90 raised the bar for seven-seat SUVs. It offers an appealing mix of luxury and technology alongside a very individual, Scandinavian design. We’re testing the high-spec Inscription trim with the new D5 PowerPulse engine here, and it undercuts both of its competitors at £52,805.

Volvo’s D5 PowerPulse unit serves up 232bhp, which is almost a match for the Land Rover, and although it produces only 480Nm of torque, the XC90 is 175kg lighter than the Discovery. 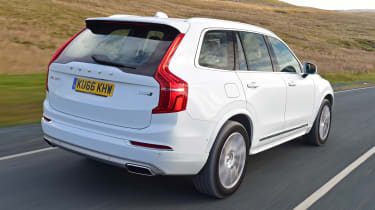 The aim of PowerPulse technology is to reduce turbo lag. The system blows air through the smaller of the two turbos when you’re off the throttle to improve response when you get back on it, then the bigger turbo provides more power at speed. However, on the road it’s difficult to notice the tech having an effect.

Despite its power deficit, the XC90 performed well on test, sprinting from 0-60mph in 7.9 seconds. The Volvo’s in-gear performance was respectable, too, as it accelerated from 50-70mph in eighth in just 12.7 seconds. That’s around a second faster than both the Audi and Land Rover. 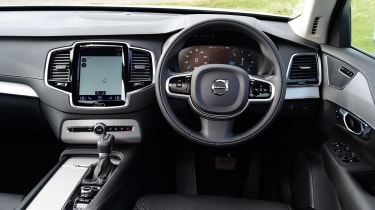 However, the Volvo isn’t as refined as either rival. While the gearbox is smooth and shifts up early, the D5 unit sounds coarse and is noticeably the noisiest here, especially when you extend the revs.

Our test car was on the standard suspension, which doesn’t smother bumps as adeptly as the Discovery or Q7. However, it mixes comfort with decent agility and refinement at higher speed. We’d still recommend upgrading to air-suspension, though. The steering is nicely weighted, and while the XC90 isn’t as sharp or grippy as the Q7, there’s less body roll than in the Land Rover.

Testers’ notes: “Big SUVs such as these are often used as towing vehicles. The XC90 will only pull a total of 2,700kg, whereas both the Q7 and Discovery have 3,500kg limits.” 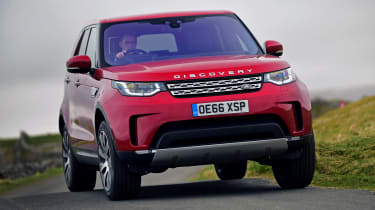 The seven-seat SUV sector has a new king. There’s no denying the Mk5 Discovery’s blend of practicality, space, comfort, quality and tech mean it offers exactly what you want from a large luxury off-roader. It’s more efficient than ever, and although it’s not particularly fast or agile, it’s beautifully refined on the move, which makes it every inch the cut-price Range Rover with even more usability. 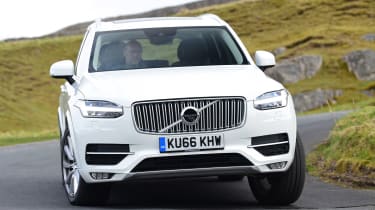 The XC90 is still a great large SUV that offers more space and versatility than the Audi with a nicely crafted, high-tech cabin. It also delivers strong performance and mixes this with impressive efficiency, but compared to the Land Rover it lacks ride comfort and engine refinement. However, it’s the cheapest and the most affordable on finance, which boosts its appeal. 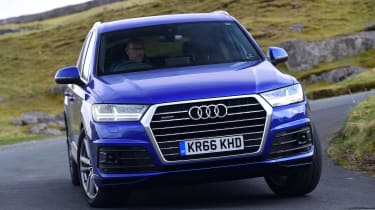 It’s easily the best to drive and is comfortable and cossetting with air-suspension, but the Q7 is simply too small inside as a seven-seat SUV. The lack of practicality isn’t the only reason it finishes third. Its acceleration and handling are mighty, but factor in the Audi’s poorer residuals and economy, plus expensive servicing, and it’s obvious its competitors have the edge. 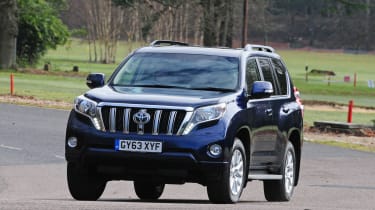 The Land Cruiser badge has a history that’s nearly as long as Land Rover’s. But the latest version of Toyota’s full-sized SUV looks expensive next to the Discovery, and it highlights just how much refinement and technology the newcomer offers. 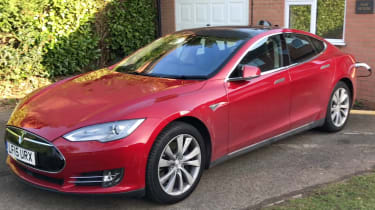 Our Tesla Model S long-termer shows what you can get for your money on the used market. The now-discontinued 85kWh model is available with seven seats, although the two rear-facing seats in the boot are cramped. Instant performance and low running costs are appealing, while the tech rivals the Disco.