With air suspension fitted as standard to every model, the Discovery rides smoothly. It’s most comfortable on the smallest 19-inch wheels, as the larger 20, 21 and 22-inch alloys do cause some harsher jolts from the rear axle over more severe bumps, but that’s not too much of a surprise given that the Disco has been designed to carry seven people and luggage.

On smoother roads, the Discovery’s weight (this is still a two-tonne-plus car despite the savings) means it moves with the road in a gentle and languid fashion, cosseting its occupants nicely.

The steering is slow and not the most precise around, so even by the standards of its class, the Discovery isn’t a particularly agile car to drive. There’s lots of body roll in faster corners, but that suits the relaxed and soothing driving experience. The refined powertrains help, too - we'd argue that comfort and quietness are the most important traits in a car like this.

All cars feature an eight-speed automatic gearbox and permanent four-wheel drive, and all models except entry-level S trim come with Land Rover’s Terrain Response 2 set-up, which can automatically sense what the car is driving on and adjust the parameters of the engine and transmission across five different driving modes to suit different types of terrain. This adds to the easy, relaxed and unhurried nature with which the Discovery goes about its business, helping to make this easily one of the most comfortable and practical cars on sale today.

All in all, this means that, despite its revised styling and even more upmarket approach, the Discovery is still unrivalled when it comes to off-road performance. 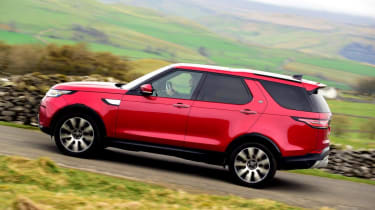 However, the Discovery's incredible size means it can be a little more challenging to thread down a narrow country road, as well as to park (although there are plenty of features to help you with the latter). Similarly, car's the weight means you need to get your braking done nice and early, but the car still feels safe and reassured, with more than enough stopping power.

To widen the Discovery’s appeal, Land Rover has developed a version of its Ingenium 2.0-litre four-cylinder diesel for the car. With two turbos to boost both low-end response and high-end power, the SD4 has 237bhp and 500Nm of torque on offer, meaning that even this relatively small engine offers adequate performance.

Officially, 0-60mph comes up in 8.3 seconds, while the top speed stands at 121mph. With so much torque, it feels perfectly acceptable in normal driving and cruises in a relaxed manner once up to speed. Refinement isn't bad, either, although it can feel strained if you start to demand full performance on a more regular basis.

An update to the 3.0-litre V6 diesel saw power jump from 254bhp in the TD6 to 302bhp in the SD6, but it's still a smooth operator rather than a performance one. It has a melodious engine note and, with 700Nm of torque - up from 600Nm - its performance is effortless. Where the SD4 can struggle with a full load or up hills, the SD6 feels muscular, even though both will effectively tow the same maximum 3,500kg.

Performance is good in the SD6, with the 0-60mph sprint taking 7.0 seconds and the top speed standing at 130mph. However, it’s the low-end response and punchier mid-range – along with the smoother soundtrack – that’d make you buy the V6.

The only petrol engine now available in the Discovery is the 237bhp 2.0 Si4 (the thirsty Si6 supercharged V6 petrol was discontinued in 2018). The four-cylinder unit is a respectable enough performer given the car’s size, with 0-60mph taking 7.3 seconds and a top speed of 125mph. 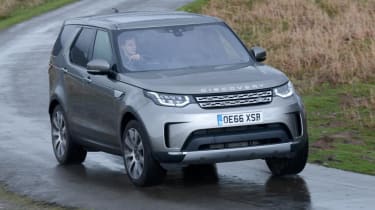