Combined with the weight reduction, adding a four-cylinder diesel to the Discovery range has helped cut down CO2 emissions. However, with the SD4’s emissions of 197g/km in S and SE trim and 194g/km in HSE and HSE Luxury still lag behind the diesel unit in the Volvo XC90 and even the more powerful TDI in the Audi Q7.

The SD4 has a combined fuel economy figure of 33.6mpg, and when we road tested the Discovery SD4, we only recorded just under 31mpg over a wide variety of roads. We've no doubt that you could do better at a cruise, but it's still a disappointing figure.

The claims for the SD6 diesel are poorer still, of course, with a CO2 figure of 202g/km in SE trim and 198g/km in HSE and HSE Luxury, and combined economy rated at 31.5mpg. The latest WLTP tests put paid to the Si6 petrol completely – a mid-20s economy figure under test conditions was the best that could possibly be achieved. The new Si4 petrol fares little better on paper, though, with an official CO2 emission figure of 222g/km in S and SE trim and 220g/km in the rest, and 25.8mpg economy.

On the plus side, every Discovery comes with a 77-litre fuel tank, so the Discovery’s cruising range should be extensive; our recorded economy figures for the SD4 mean you’ll easily travel more than 500 miles between fill-ups. You'll have to swallow a three-figure sum to brim the tank after a long run like that, though.

The entry-level Discovery S is rated at group 33, which is relatively high.

With plenty of tech on offer and options pushing the value of the car up, it’s no surprise that a top-spec HSE Luxury with the SD6 diesel is rated at group 42, so will be fairly costly to insure. 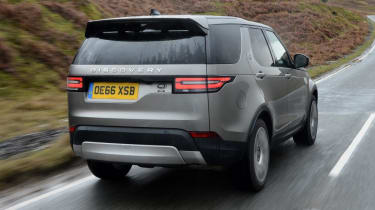 We had a quote of £1,090 for a year’s fully comprehensive cover on an HSE SD4 model for our sample driver, a 42-year male driver living in Banbury with three points on their licence.

As with most Land Rovers, the brand image and desirability of the badge mean the Discovery’s are strong.

The entry-level model will hold onto just under 50 per cent of its value, but it’s not predicted to sell that well anyway. SE, HSE and HSE Luxury with both the SD4 and SD6 engines will retain around 57 to 59 per cent of their value, which is good for a big SUV.