Disco’s interior is luxurious and cavernous, offering exactly what you want from a large, upmarket seven-seat SUV

WIth all seven seats upright, the Disco serves up 258 litres of luggage space. This increases to 1,137 litres with the rearmost seats folded down, meaning there’s more luggage room on offer than in its main rivals.

Drop the second row of seats, and the Discovery delivers a cavernous 2,406 litres, meaning there’s as much room in the rear as in some small vans – or it feels like it, at least.

Depending on which trim level you opt for, there are plenty of clever ways to fold the seats. With the upgraded infotainment system, you can drop the back seats individually using the touchscreen, while there’s also a smartphone app that lets you raise and lower the seats remotely.

Fundamentally, the Disco offers acres of space, so no matter how big your family, the car caters for them with plenty of comfort and lots of versatility.

Our only minor gripe is that, while you fold the back rests of the middle row seats electrically, you have to slide the seat bases manually to climb into the very back. The aperture it leaves isn’t huge, but it's adequate when compared to the tighter XC90 and Q7.

At nearly five metres long and more than two metres wide, the Discovery feels vast on the road. However, it’s not too much larger than the XC90, while it’s actually shorter than the Q7. 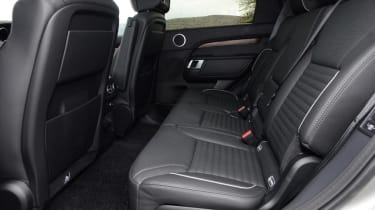 The Land Rover’s tank-like feel on the road stems from its chassis setup, as it’s not quite as agile as either the Volvo or Audi. However, while this gives it a more cumbersome feel in corners, it’s also extremely relaxed and offers better use of space inside, given its footprint.

No matter what configuration the seats are in, if you’re sat in the middle row there’ll be plenty of room – even with the bench slid all the way forward.

This gives third-row passengers even more space, and in this configuration, it’s really the only car in its class that can accommodate two fully grown adults in the rear in relative comfort. Shoulder room is good, while the Discovery’s traditional stepped roof also offers decent headroom in the very back. This is necessary because of the 'stadium' seating layout, where the back seats are mounted slightly higher than the ones in front of them to give a better view forward.

These cars will probably be bought by families. So, with plenty of Isofix tethering points, the Discovery should offer lots of versatility if you’ve got young children still in car seats.

The Discovery’s boot is huge, but importantly it’s also a uniform shape. There’s a dedicated storage space for the load cover when you’re using all seven seats, and opening and closing the boot is easy, thanks to a powered tailgate that features gesture control tech on the top trim level – meaning it will open if you flick your foot under the bumper. This should help if you’re returning to the car with lots of bags.

One big change for this new Discovery is the lack of a split tailgate with a drop-down lower section that can double as a seat. However, Land Rover knows it’s something of a Disco trademark, so has come up with a clever solution.

The one-piece hatch opens, revealing an electrically operated flip-down ledge that can support up to 300kg. It’s a neat trick that adds yet another practical touch and should mean owners of previous-generation Discos won’t have to sacrifice any usability when it comes to running this fifth-generation model. 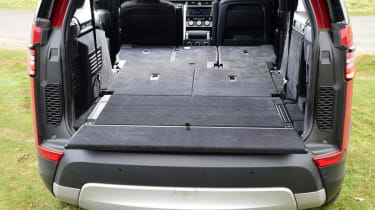 All Discoverys have an impressive maximum braked trailer towing weight – all will tow at least 3,000kg. The SI4 2.0-litre petrol cannot pull any more than 3,000kg irrespective of spec, but either of the SD4 or SD6 diesels will pull 3,500kg thanks to the additional torque.