An aluminium monocoque chassis means that Land Rover has been able to offer even more space inside the Discovery than in the previous version - and there's more space than in most of its rivals, too.

Starting with the third row of seats, the Land Rover offers more legroom than either the Volvo XC90 or Audi Q7, accommodating fully grown adults with relative ease if the middle row of seats is slid forward slightly. Even if you do this, passengers in the second row will still have plenty of legroom.

Alternatively, if you’re only carrying five, you can maximise passenger space by sliding the middle seats back. There’ll still be more than enough luggage room on offer if you do so. 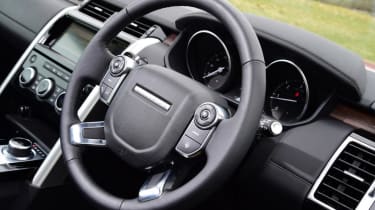 Elsewhere, quality is first rate, with Range Rover standards of materials and refinement. The infotainment and climate controls are all very similar, except for the fact that the panel housing the ventilation controls flips down to reveal a storage compartment for mobile phones and sunglasses.

There are plenty of other areas to stow items, including a huge bin beneath the twin cupholders, a large central storage area under the centre armrest (that can be refrigerated) and big door bins in the front and rear.

There’s also a twin-glovebox arrangement for even more practicality on all but the most basic S models, while even passengers in the third row get storage areas for trinkets.

As with the exterior design, Land Rover has evolved the Discovery’s cabin design so it feels much more modern and upmarket. Yet, it mixes this with a robust nature in a way that Land Rover has become famous for.

The dials aren’t quite as clever as on some rivals, as both the XC90 and Q7 offer more sophisticated digital displays, but the Discovery's screens and infotainment – including the optional rear seat entertainment pack – give it a luxurious, hi-tech feel.

The Discovery’s infotainment system is so much more than just a sat-nav. With Land Rover’s InControl Remote Premium app, you can fold the rear seats from your smartphone (you can do it through the 10-inch touchscreen, too), as well as check information, such as the fuel level, and unlock the doors.

With the Advanced Tow Assist option (budget £400), you can easily reverse with a trailer, changing direction using the Terrain Response select wheel, while the system gives you guidelines on when to turn. Along with the upgraded stereo and Land Rover’s connected services, there are six USB sockets, so there’s plenty of scope to charge gadgets. 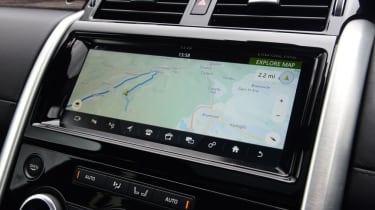 There’s so much functionality and gadget connectivity on offer (you can even sync your Apple Watch through the Remote app, although CarPlay isn’t offered) that it highlights the infotainment system’s weakest point: the interface and response to inputs aren’t the slickest, with a noticeable delay between you pressing the screen and something happening.