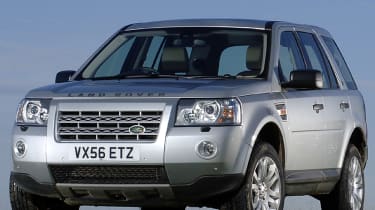 Driving The Land Rover has an immediate trump card - the way it drives. In this respect, it's ahead of every rival. Off-road, with the assistance of its Terrain Response system, it inspires more confidence and has better traction, while it excels on tarmac, too. The Land Rover is the sector's quietest, most comfortable and stable car at speed, and even on rough roads, there are few unwanted vibrations through the sturdy frame. It's not as sporty as, say, a Honda CR-V, but that doesn't matter in an SUV. Rather, the Freelander scores as it covers ground quickly, efficiently and effortlessly - thanks to the excellent suspension and superbly accurate and informative steering. The all-new TD4 diesel gives the class-best a run for their money, too. Developed with Peugeot Citroen, it's the most powerful 'mainstream' engine in its sector, and pulls well from under 1,500rpm. Despite the car's weight, it never needs to be worked hard, and remains smooth, quiet and capable. It's a big step forward form the old unit, as is the chunky shift of the six-speed manual gearbox, and the firm brakes.

Marketplace Although the latest Freelander has been made to look chunkier and more modern than its best-selling predecessor, the styling does nothing to alienate all those owners of the older machine. The proportions are the same, as are details such as the clamshell bonnet, slightly stepped roofline and bulbous nose. However, this upmarket appearance coincides with an increase in price. Not that you're getting much more metal for your money. Dimensions closely follow the original - so those hoping the latest model would now better the class-leaders in terms of interior space will be disappointed. Still, it's a very British product that boasts a nine-strong range that includes two engines (3.2 V6 petrol and the 2.2 TD4 diesel). It is challenged by the Honda CR-V, Toyota RAV4, BMW X3 and, Hyundai Santa Fe and Nissan X-Trail.

Owning The rear doors are short and, once you're inside, legroom is no more generous than a Nissan X-Trail. The high-floored boot isn't the most spacious and, though the Freelander is practical, we'd have liked to see more family-friendly features. But much attention has been paid to the driving environment. You sit high, the window line is low and you can see the bonnet, so the Freelander is very easy to place on the road - handy for parking. The driving position is superb and the switchgear is clearly marked and well laid out. Ergonomically it's very good, and it's classy, too. The dash looks fresh and uses high-quality materials (we really like the rattan-style floor mats). However, this is reflected by those higher list prices - while they make the Freelander more exclusive, they're also likely to take it beyond many buyers' budgets. Despite the hi-tech engine's promise, we also averaged only 28.4mg, while servicing could be pricey and the old car never had the best reliability record. At least retained values look promising.