In the past, owners have been critical of the car’s running costs and practicality, but they praised in-car tech and its comfort and reliability. So as long as you can live with the compromises, the Evoque should stand you in good stead. 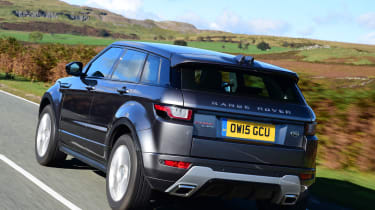 The Evoque earned a five-star Euro NCAP rating in 2011, but it has lower overall percentage than the Audi Q3. However, it has plenty of safety kit, while Land Rover’s patented Terrain Response system will help the Evoque to venture further off-road.

There have been a few recalls over the past two years but overall Land Rover's reliability record seems to be on the up.

Every Evoque comes with a three-year fully comprehensive unlimited-mileage warranty and roadside assistance after purchase. Land Rover also offers an extended warranty to give customers a further peace of mind.

Buyers also have the option to extend the mileage limit to 75,000 miles for an additional £149 if desired. The plans include the repair or replacement of parts such as oil filters, air filters, new engine oil, washer fluid and brake fluid top up.