The Evoque is good to drive, too and it's pretty relaxing on longer journeys. On the move, refinement is good and the ride is decent over most road surfaces, although the odd bump can upset the bigger 20-inch wheels, sending a nasty jolt up into the cabin.

Be aware though, that the baby Range Rover's hefty 1,640kg kerb weight can send it running wide if it's pushed too hard in the corners. At least the steering is precise and the car turns in quickly.

As an option on some trim levels (but not on the convertible) you can fit adaptive magnetic MagneRide dampers, and these help the Evoque stay stable and composed in corners, with body roll kept to a minimum. 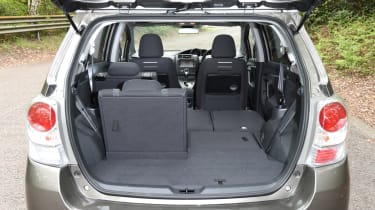 The Range Rover Evoque's nine-speed automatic gearbox is smooth, particularly when pulling away from a standstill, and on the motorway it is quick to change up to save as much fuel as possible. However, around town the gearbox can get confused as to what gear to be in, as there are so many of them. This can result in slightly jerky progress.

When using the steering wheel-mounted gearshift paddles, it's easy to get stuck between third and fourth gear – but that's all you need on a fast A-road. The six-speed manual is just as precise, but most customers will favour the automatic version, which is far more widely available.

The view ahead from the high-set driving position is excellent, but it's worth noting that visibility is also an issue in the Evoque: the shallow side windows and letterbox-like rear window can make parking a bit tricky – although rear parking sensors are standard on all models.

Land Rover technology like Hill Descent Control, which gradually eases the car down a steep hill, and Terrain Response, which automatically changes the car's settings for off-road driving, mean the Range Rover Evoque is a very capable off-roader, too.

If you don't value outright speed, the entry-level 148bhp 2.0 eD4 diesel engine (which comes exclusively with two-wheel drive) should fit the bill. It’ll hit 0-62mph in 10.6 seconds, which is quicker than the old 2.2-litre diesel engine, despite also being more efficient. The new engine is far quieter and a lot more refined, too – both on a motorway cruise and, especially, around town – which makes it more relaxing to drive. 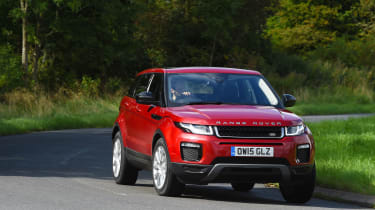 The 178bhp 2.0 TD4 diesel suits those after more power and can hit 0-62mph in 8.5 seconds, but it's slightly more expensive to run. Meanwhile, the range-topping SD4 diesel has two turbochargers and uses a ‘series-sequential boosting’ system, with the smaller turbo helping at low revs, and the larger second turbo joining in at higher engine speeds to produce a hefty 237bhp and 500Nm.

That’s enough to give the car pace not far short of what you’ll find in a similarly-priced Porsche Macan S Diesel, and once you’ve got the Evoque up and running, it’s the torque that makes the most lasting impression. With peak pull arriving at just 1,500rpm, it responds very keenly in pretty much any situation – and certainly more quickly than you would expect of a four-wheel-drive car that weighs well over 1,800kg. Our one criticism is that the Range Rover doesn’t feel as quick as the 6.9-second 0-60mph time suggests. But across country, this is a fast car.

The powerful 237bhp 2.0 Si4 turbocharged petrol is also quick (0-60mph takes 7.6s), but it's very thirsty so we’d steer clear of that. What's more, it's only available on Dynamic models of both the three and five-door Evoque, as well as the Evoque Convertible. The drop-top is auto only, but can be specced with the higher-power diesel, too.

Removing the roof has added around 277kg to the Evoque Convertible, taking it to almost two tonnes, and it feels it. The nine-speed auto kicks down more regularly on twistier roads and the extra weight can also be felt in the handling.