The least powerful engine in the Range Rover Evoque line-up is the front-wheel drive eD4 model, which gets a 148bhp 2.0-litre diesel unit under the bonnet.

That model manages an impressive (in SUV terms at least) 65.7 mpg with CO2 emissions of 113g/km in the five-door, so it's no surprise that this particular engine is a favourite among Evoque buyers.

Unless you're a serious off-roader, avoid the four-wheel-drive 178bhp 2.0 diesel as it returns just over 55mpg on the combined cycle and emits 134g/km of CO2. We'd expect fuel economy to be significantly lower in the real world, but selecting the nine-speed gearbox does help matters in this department. 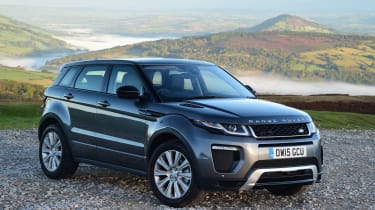 The thirsty 237bhp SI4 turbocharged petrol returns 36.2mpg and emits 199g/km of CO2, which means it should probably be avoided in most cases – it will probably be even worse on fuel than the figures suggest too.

The Convertible is not a particularly cheap car to run; it emits 149g/km of CO2 in diesel form, and an eye-watering 201g/km with the petrol engine. Throw in the relatively small fuel tank and even if the cost of refuelling doesn’t bother you, you may well get fed up with the frequency of trips to the petrol station.

The cost of servicing across the range isn’t cheap, but it isn’t any more than you’d expect for a premium SUV like the Evoque.

The Evoque will retain far more of its value over a three-year period than the BMW X1 and Audi Q3. Land Rover has calculated that the improved running costs, longer service intervals and strong residual values could potentially save owners up to £3,700 over three years of ownership.

Although it will retain more of its value, the Evoque does attract a higher insurance group than its closest rivals. Group 33 for the 178bhp diesel is significantly higher than the equivalent Audi Q3 which is situated in group 24.  That means you can expect to pay a few hundred pounds more in car insurance for the Range Rover.