The Range Rover Evoque is Land Rover’s most successful ever model – and it’s easy to see why. It’s not quite a cut-price range Rover, but a lot of the tech, capability and style have been crammed inside this compact SUV.

The Evoque has been around since 2011 and only seen minor updates since then, but it remains smooth to drive, comfortable to sit in and has never been cheaper to run thanks to the addition of JLR’s new Ingenium diesel engines.

Refinement has also taken a step up, and equipped with the nine-speed automatic gearbox, there are few more luxurious compact SUVs out there. Just be careful with the options as the price can quickly add up.

It’s hard to believe, but a decade has passed since Land Rover shocked the Detroit Motor Show with the LRX concept that previewed the Evoque.

The Evoque has been on sale since 2011, and although there have been some detail changes over the years, the car you can buy in a Land Rover dealer today is still essentially the same car. Admittedly, some of the novelty has worn off, but there’s no denying that the Evoque still stands out a mile next to more conservative rivals like the Audi Q5, BMW X3, Mercedes GLC or Volvo XC60.

From the word go, the Evoque was available as both a sleek three-door (rather ambitiously called a ‘Coupe’ by Land Rover) and as a five-door. That choice remains to this day, but it was extended in 2017 by the addition of a soft-top convertible, which is based on the coupe.

Each model range has its own selection of trims, but the five-door has the widest choice, running from the most basic, SE, up to the lavish Autobiography. The Coupe range stats with SE Tech, but the convertible range is rather more limited, covering just SE Dynamic, HSE Dynamic and HSE Dynamic Lux. 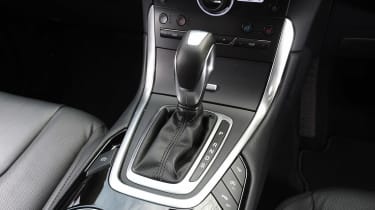 Even the basic SE is pretty well equipped, with leather upholstery, alloy wheels, an 8-inch touchscreen, the InControl Touch infotainment system, and automatic windscreen wipers. To this, SE Tech adds sat-nav and xenon headlights with high-beam assist, while HSE Dynamic has larger alloys, a bigger touchscreen (part of the Touch Pro system), uprated stereo and sat-nav, and a panoramic roof.

SE Dynamic is unique to the convertible and, although it’s the most basic trim with that version, it still comes with sat-nav, a 10-inch touchscreen, a 10-speaker stereo, xenon headlights, automatic wipers and leather upholstery.

By far the majority of the Evoque range comes with four-wheel drive, but buyers who are prepared to trade some of that versatility for better fuel economy can get a low-spec version of the five-door or coupe with the 148bhp eD4 diesel engine, a manual gearbox and two-wheel drive. You can tell these versions apart from the other models because the Evoque badge on the rear of the car is blue.

The four-wheel drive models are surprisingly good off-road – yes, even the convertible – but that may well not be especially important to the typical Evoque buyer.

As you would probably expect, the bulk of the range comes with diesel engines, and the company’s Ingenium units offer a choice of 178bhp or 237bhp power outputs, badged TD4 and SD4, respectively. In most cases, they’re paired with a nine-speed automatic transmission, but you can buy a five-door with a manual gearbox and the less powerful of the two engines.

Two Si4 Ingenium petrol engines are available as an alternative – with a choice of 237bhp or 286bhp, but always with an automatic gearbox. However, they’re an option only with some of the higher trim levels (HSE Dynamic and above); and, while they bring stronger acceleration, the price you pay is fuel economy.