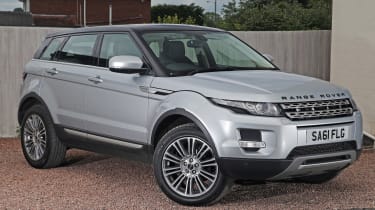 To scoop our Car of the Year award takes some doing, but that’s what the Evoque managed when it launched in 2011. The next year it bagged our Best Compact SUV title, so it’s no wonder the 4x4 has sold so well, with more than 500,000 produced within five years of its launch. Its looks still stand out on the road. When we ran an Evoque on our fleet we loved the ride and handling, performance, generous equipment and top-quality cabin. But high prices, poor fuel economy and limited practicality took the edge off things for us – so before buying, make sure they don’t do the same for you.

If there’s one way of guaranteeing healthy sales, it’s to start high then introduce more affordable ways for consumers to access a product. So when Land Rover launched a more affordable compact luxury SUV with Range Rover branding in 2011, it could hardly fail.

Known as the Evoque, this sharply styled 4x4 retained the outlandish looks of the LRX concept that gave us our first taste of the new model in January 2008 – and almost a decade later the design, although more familiar, is still as desirable as ever.

The Range Rover Evoque has been produced since 2011 and is still in its first generation. It’s this model that we’re focusing on here. 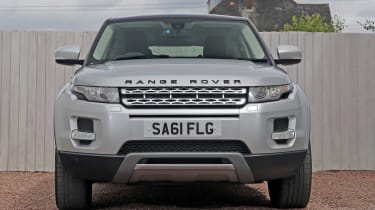 The Evoque went on sale in summer 2011, in three and five-door guises. From the outset there were 2.0-litre petrol or 2.2-litre diesel engines, the former as an auto only.

Diesel cars came in six-speed manual 150bhp form with front-wheel drive (eD4) or four-wheel drive (TD4); there was also a 190bhp SD4 with four-wheel drive and manual or automatic boxes. At first the auto was a six-speed unit, but from autumn 2013 it was replaced by a more efficient nine-speed box. A raft of new driver assistance tech made its debut at the same time.

A facelifted Evoque arrived in summer 2015 with more efficient engines, extra tech and safety features, plus a tweaked design. A convertible car followed in spring 2016.

Petrol-engined Evoques are thirsty, so the diesels make more sense to buy. Any transmission option is desirable (manual, auto, FWD, 4WD), especially the nine-speed auto, but beware of any car that’s done a lot of towing because its drivetrain may have suffered. 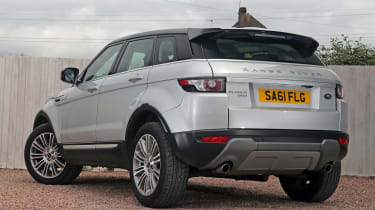 Alternatives to the Range Rover Evoque

The Evoque has some talented rivals, such as the Audi Q5, which has efficient engines and lots of equipment, but is less distinctive inside and out than the baby Range Rover.

All of this also applies to the BMW X3, which drives well and, as with the Audi, comes in five-door form only.

The Volvo XC60 has just been replaced, but the outgoing model still looks good and comes crammed with safety features, while comfort levels are a major plus, too. We’d also look at the Mazda CX-5, which is very good value for money, and could well prove more reliable than the Land Rover.

Many Evoques have a heated windscreen. But if you do a lot of night driving, lights from oncoming traffic can pick out the elements, causing a distraction.

All examples have leather trim, which can get very baggy very quickly, especially on the bases of the front seats. Check the driver’s seat first.

If the luggage bay is full the parcel shelf can rub on the boot surround, wearing away the finish on the latter. A repaint is then necessary to repair the damage.

Clonks from the front or rear suspension can be evident when the Evoque is going over bumps. So far, there’s no definitive solution to rectify the problem. 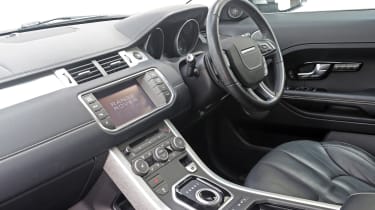 The Evoque is classy inside, with premium materials everywhere, but the multimedia touchscreen feels dated. The seats are comfortable and there’s plenty of room for two in the back. Boot space in the three-door is 550 litres with the seats up or 1,350 litres with them down; the five-door offers 575 and 1,445 litres.

There have been six recalls. The first was in December 2015 because engine harness chafing could lead to short circuits and the engine cutting out. The next came in August 2016 due to fuel leaks caused by chafing hoses. 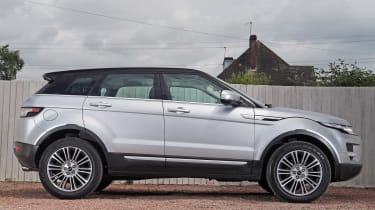 A ranking of 55th in our Driver Power 2017 satisfaction survey is respectable; last year the Evoque achieved 89th. The best it’s ever managed was 36th in 2014. In the latest poll the car got mostly mid-table scores, with ride and handling rated highest. But 23 per cent of owners said they had a problem with their Evoque.