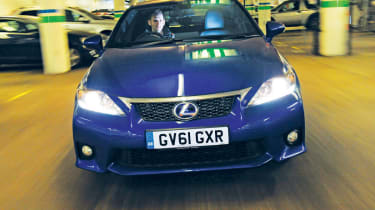 8
The arrival of a hybrid in the car park hasn’t caused the stir it once would – but we’re looking forward to seeing how the Lexus CT 200h stacks up.
The efficient luxury hatchback emits only 94g/km of CO2, which means free road tax and exemption from the Congestion Charge – great news given our office’s central London location. In the few weeks we’ve had it, the Lexus has been used for everything from airport runs to photoshoots. It even survived the early February snowfall without drama.
Staff photographer Pete Gibson has racked up most of the CT 200h’s 1,268 miles to date, while his Audi Q3 was being put to good use in the Alps. Even though he was itching to put his compact SUV’s combination of four-wheel drive and winter tyres to the test in the British winter, Pete was impressed by the Lexus.
“I could fit all my camera gear in the boot, and it coped with the snow surprisingly well,” he said. “It’s also very refined and I love the infotainment system’s joystick controller – it looks odd, but it’s great once you get used to it.”

Deputy road test editor James Disdale was also pleasantly surprised, in particular by the driving experience. “The Lexus isn’t fun to drive in the conventional sense,” he explained. “You really have to adapt your driving style to make the most of the hybrid powertrain – and I think that’s all part of the fun.”
Our CT 200h is the new F Sport model, so it looks racy for a car with claimed fuel economy of 68.9mpg. It features F Sport side skirts, a mesh grille at the front and revised bumpers. A set of gunmetal-coloured 17-inch alloy wheels and dark-tinted windows add to the sports car effect.
Yet it’s luxurious rather than sporty inside. There’s standard leather upholstery, heated front seats (great during the cold snap) and cruise control. Our car has an £1,850 optional infotainment package, which comprises sat-nav, an upgraded 10-speaker stereo system and that Remote Touch joystick interface.
It also includes a parking camera, but this is something we’d like to see fitted as standard. The CT 200h is intended for use in town, yet your rear visibility is quite badly compromised by thick C-pillars and a shallow back window. The car costs the thick end of £28,000 before options: adding front and rear parking sensors will set you back £560.
But if you regularly drive into and out of central London like we do, the £10 daily saving that comes from avoiding the Congestion Charge will make expenses like that easier to stomach. And compared to other newcomers that escape the charge, the baby Lexus is very appealing. We recently tested the Peugeot 3008 HYbrid4 crossover and while it’s more practical than the CT 200h, we’d definitely take the luxurious Lexus every time.
So far we’ve achieved a disappointing 39.6mpg, but I reckon this will improve as we learn how to make the best use of the car’s hybrid system. On a recent 32-mile trip home and back I struggled to squeeze enough fuel into the tank to reach the minimum sale amount. This has never happened to me before, so it definitely has the potential to be an economy champ.
Even with its firm F Sport suspension, the car copes with bumps and potholes pretty well and its Lexus badge and quality are clear for all to see. In our experience, beating the system rarely feels this good.

“It’s still early days, but we would like better fuel economy. While 39.6mpg isn’t bad for a car that spends so much time in town, we want more.”Stuart Morton, Chief sub-editor

“The Lexus CT 200h is individual and distinctive – it’s a very refreshing change from the much less interesting German cars that you could spend this kind of money on.”cousins11, via www.autoexpress.co.uk