Not as stylish as the S-Class and expensive, too, but undoubtedly special on the road 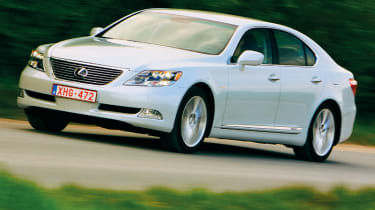 Perhaps one of the biggest surprises served up by Lexus's LS600h is the normality of the driving experience. A quick glance at the specification list suggests this is no ordinary car; yet while it's undoubtedly special out on the road, the hybrid doesn't feel completely alien when compared with models from BMW or Mercedes. The newcomer is expensive, though, and its styling is less confident than the S-Class's.

It's the most powerful and expensive hybrid-engined car around - and it's set to change the world.

At least, that's what Lexus is promising as it prepares to launch the new LS600h in the UK in October. Packed with technology and sporting a 445bhp petrol-electric hybrid V8, the car is the third of its type from the Japanese firm, but the first to target the limousine market.

Aimed at buyers whose desire for the very latest automotive technology is matched by their environmental conscience and the size of their bank balance - Lexus has hinted flagship models may cost £100,000 - the LS600h is a groundbreaking machine. Overall, the styling marks a huge improvement on the previous-generation LS, but the rear's resemblance to BMW's 7-Series is a little disappointing. Inside, there are no such troubles. As well as being beautifully trimmed, the cabin is enormously comfortable. It's spacious, too, with both driver and passengers offered huge amounts of room.

All cars will have full leather interiors, and as such only one trim level will be available. Owners will be able to personalise the LS by choosing whether to go for standard or long-wheelbase versions, or by specifying four or five-seat cabins. We drove the standard-wheelbase model first, and were immediately impressed by the refinement. At low speeds, the electric powerplant does nearly all the work, wafting you silently and smoothly through town.

On the open road, the 5.0-litre V8 engine chatters into life, propelling the 2,270kg machine from 0-62mph in only 6.3 seconds. The in-gear acceleration is strong and seamless, thanks to an eight-speed, semi-automatic gearbox.

Even more impressive are the newcomer's CO2 emissions which, at only 219g/km, are better than even the ultra-efficient Mercedes S320 CDI's. Steering is light yet accurate and, thanks to the standard active anti-roll bars and variable pneumatic suspension, the LS leans surprisingly little through corners. The braking sys-tem is really effective and, despite its role in regenerating the 650V powerpack, feels just as precise as any other that we have tested.

We also got behind the wheel of the extended LS600h L, which is 120mm longer than the standard car. However, the biggest difference between the two is not the size, but the fact that the heavier L variant does without active anti-roll bars. As a result, the car leans more in corners, and feels a little less nimble.

By far the best place from which to enjoy the long-wheelbase machine is in the rear, where ottoman-type chairs can recline until they are virtually flat. They also have a massage function unlike any other that we have ever experienced!

So should Mercedes and BMW be worried? In short, yes. Lexus sales executives told Auto Express that, with 102 orders having already been taken, demand this year is being kept deliberately manageable.

However, as they also point out, 65 per cent of those 102 orders are from buyers new to the Lexus brand - at least five of whom are choosing to leave the comfort of their Bentleys for the world's first luxury hybrid.

With so many car companies predicting tough times ahead, Lexus's confidence and enthusiasm for such vehicles and for the future makes a refreshing change. And if their sales teams are smiling, there's no doubt that their customers will be, too.

The LS600h really could be the machine that changes the world of luxury cars as we know it. And it will do so while the competition is completely unable to respond.