The Maserati Ghibli now drives a lot better than it once did, courtesy of the new electric steering. It replaces the old conventional hydraulic setup, and while it isn’t perfect – it can feel a little inert – it’s a step up from before.

But as a pure driver’s car, it doesn’t quite hit the spot. The ride quality is mediocre, even with the optional Skyhook electronic damping system, while the Ghibli never feels that quick, regardless of the engine choice. The chief problem is the weight, with the Ghibli knocking on for nearly two-tonnes.

Take it easy, and the Maserati is a mixed bag. Firm suspension fidgets and shimmies over bumps where the Jaguar XF feels stable and solid, while the sharp brake pedal also takes some getting used to. The car is great on a twisting B-road, but the rest of the time it’s too firm and unsettled to be a relaxing cruiser.

To some enthusiasts, the idea of a diesel Maserati will be sacrilege, but the brand has done a decent job of integrating the 3.0-litre V6. While there’s a bit of clatter at start-up, and the engine is a bit noisy, when you press the Sport mode button, the Active Sound generator in the exhaust masks the diesel thrum with a pleasingly meaty rumble.

Engaging drive with the shifter is tricky, as you need to be deliberate when pulling the trigger to select it, otherwise you’re left in neutral, which can be frustrating. Another niggle is that it’s easy to accidentally knock the lever across from drive to Sport mode, because it’s closely positioned just ahead of the climate and infotainment controls. 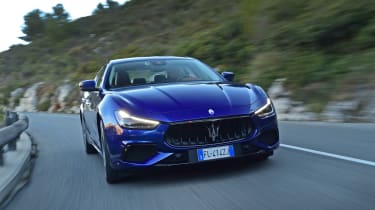 The 271hbp 3.0-litre V6 diesel isn’t as fast as the engine in the BMW 530d – at 6.3 seconds it’s a second slower from 0-62mph. It also sounds a bit old school when you start it up. It revs smoothly, though, and delivers plenty of mid-range urge with an interesting exhaust note for a diesel.

If it’s excitement you’re after, the Ferrari-built twin-turbo V6 petrol will be more to your liking. Even in its less-potent 345bhp form, it delivers sharp throttle response and a much more Maserati-esque growl from the quad exhausts. 0-62mph arrives in 5.5 seconds, or 4.9 seconds in the 424bhp Ghibli S. Top speeds for the petrol models are 166mph and 177mph respectively.

In-gear response is good, but the eight-speed box has clunky shifts when left in auto mode. We’d recommend adding the £245 aluminium steering wheel paddles and taking manual control – the paddles are good to use and add to the car’s sporty feel. The paddles are standard on the GranSport trim level.