The Ghibli’s swoopy styling impresses, but interior ambience is let-down by the details

Not many cars look as dramatic as the Ghibli. The low snout takes inspiration from the GranTurismo coupe, while the distinctive trident badge and small headlights provide a menacing look. Its front wings rise over the wheels and behind the arches is a set of three false air vents – a typical Maserati design touch – while the low roof and small glass area add to the sporty feel.

The Ghibli isn’t quite as well resolved at the rear. Maserati badges on the C-pillars are another traditional touch, but the narrow rear screen, rounded bootlid and small LED lights give it a bit of a dumpy look. Still, with quad exhausts and no trim badges, you get no clue that a diesel is under the bonnet. 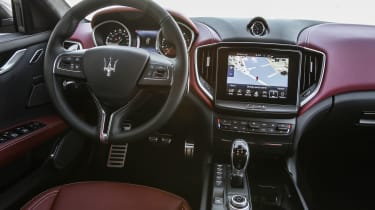 With the updates in 2017, the biggest changes came inside, with a new 8.4-inch infotainment system and addition of Apple CarPlay. A new rotary knob on the centre console gives easier access to the system's functions, while more detailed graphics make the Ghibli feel a lot more modern inside than it used to.

There’s plenty of luxury and leather but sadly, interior quality doesn’t feel quite on a par with its rivals. The leather-topped dashboard adds a touch of class, but the switchgear is a let-down. The hard plastic buttons aren’t very nice to use, while the window switches on the driver’s door look like poor copies of Mercedes items. The centre console gets a textured natural wood finish, but if that’s not to your taste, gloss and carbon fibre finishes are available.

The 2017 facelift coincided with the introduction of two distinct trim levels, both of which are available as upgrades across the range. The GranLusso has been designed with luxury in mind, featuring Ermenegildo Zegna silk upholstery and soft-close doors. The GranSport is, as the name suggests, more sport-focused, and features sports seats, sports steering wheel with shift paddles, and soft-close doors.

The Ghibli provides its driver with a large, centrally-mounted 8.4 inch touchscreen for navigation and infotainment functions. It’s operationally satisfactory and a lot better than before, but nothing like as slick or intuitive as the best German systems.

On the plus side, the infotainment display was updated in 2017 and now features Apple CarPlay as standard. Maserati has also added a new rotary controller, which is a significant improvement over the setup found in the old Ghibli, but some way off BMW’s iDrive system for ease of use.

There are two audio system upgrades available – a 10 speaker Harman Kardon set-up, or the range-topping Bowers and Wilkins system with 15 speakers and 1,280 watts of output.