Limited-edition Mazda 3 Sport Black hatch has plenty of kit and feels well made, but how does it compare to the standard models? 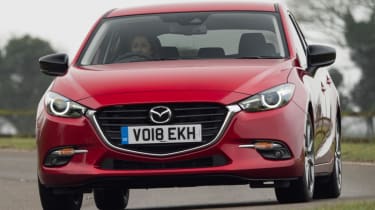 There’s nothing dramatically wrong with the Mazda 3 Sport Black; it’s well equipped, nicely built and decent to drive. But it doesn’t offer too much over the SE L Nav model, which costs less on list price and, crucially, monthly installments as well. If you’re after a Mazda 3, we’d still nudge you in the direction of the regular range instead of this limited-edition special.

An all-new Mazda 3 is on the way, but the existing model has about a year left to run – so the Japanese brand is trotting out the special editions to keep up interest until the next generation arrives.

The Mazda 3 Sport Black is the latest effort – a limited-run special that brings extra kit and styling tweaks. It’s available only as a hatchback, and is based on the 2.0-litre SE L Nav car. It gets a jet-black roof spoiler and door mirrors, a choice of metallic paint schemes and, in addition to the regular car’s spec, a reversing camera, LED headlights and keyless entry.

The styling additions don’t really change the 3’s shape too much – so your view on the value proposition here will depend greatly on whether you consider a reversing camera a must-have item.

The rest of the package remains the same as usual – and in lots of areas, that’s no bad thing. The 3 has relatively sophisticated rear suspension, and you can feel it. The Mazda doesn’t dial out every urban pothole, but it makes a decent fist of cushioning you from all but the worst lumps – while still delivering crisp body control.

The steering is nicely weighted and direct, and the gearshift is one of the best in the business. It’s not quite up to MX-5 levels of slickness, but it’s sharp and has a pleasingly short throw. Few family hatchbacks have such a well-judged range of control weights. 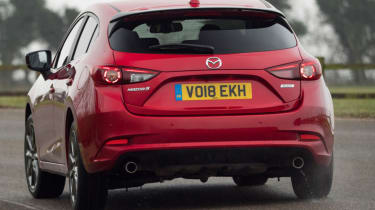 Negatives remain, however. The 2.0-litre petrol engine produces just 118bhp and a modest 210Nm of torque, so you’ll need to work it reasonably hard to make brisk progress. It’s fairly refined and smooth, but the lack of a turbocharger means that you’re more likely to wring it out into the higher reaches of the rev range, where engine noise does begin to intrude.

This trait is nowhere near as annoying as the 3’s infotainment system, which has a crisp enough screen but software that isn’t worthy of it. The navigation is clunky to use and gives poor guidance, and there’s no chance to bypass this and use the mapping or audio streaming from your phone because Android Auto and Apple CarPlay aren’t supported. 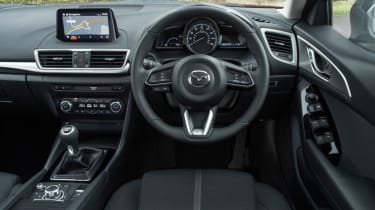 Perversely, the Sport Black version does actually include some metal-finish trim to brighten the facia, but it’s still a pretty dull affair, with swathes of textured black plastic. It feels well screwed together, however.

For all the latest Mazda news and reviews, head to our dedicated Mazda hub page.