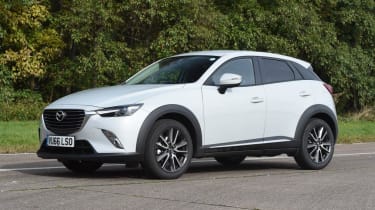 Supermini-SUVs have become popular, but many lack all-round polish. Not the CX-3; it feels like a premium small car that’s good to drive, handsome and refined. However, its cabin isn’t as spacious as those of some rivals, while relatively steep prices from new are reflected in second-hand values. It’s best viewed as a high-riding supermini, and it isn’t an ideal family car if you have tall teenagers; rear headroom is a little tight, while boot space also lags behind rivals’. If you’re looking for a sharp, well-made small SUV that stands out from the crowd, though, this Mazda might just fit the bill.

Although Mazda has dominated the budget sports car market for 30 years, the Japanese firm has always had a lower profile than it deserves in the family car class.

Some of its products have come and gone with barely anybody noticing, and one of its more low-key current models is the CX-3. Ever since this supermini-SUV arrived it has been overshadowed by its more visible bigger brother, the CX-5.

That’s a shame for the CX-3, because it comes with all of the characteristics you’d expect of a Mazda: excellent build quality, an enjoyable driving experience, plenty of equipment as standard and impressively thorough engineering. The CX-3 isn’t perfect for everybody, of course, but is this accomplished compact SUV right for you? 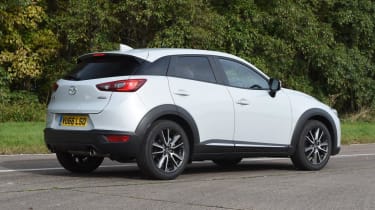 There was a choice of 2.0-litre petrol or 1.5 diesel engines when the CX-3 hit dealers in August 2015, the former coming in 119bhp or 148bhp forms. The 18-strong range offered something for everyone, with manual or automatic transmissions, along with front or four-wheel drive.

Suspension revisions, upgraded safety kit and more soundproofing featured from September 2017 and, at the same time, Mazda introduced some dealer-fit packs. These included a body-styling kit, a towing pack (tow bar and boot liner) and a travel package (roof bars and a Thule roof box).

A facelifted CX-3 was released in August 2018, with the 1.5-litre diesel engine being replaced by a 1.8 unit. The range was cut to just eight derivatives, each with higher-quality cabin materials than before, while the power steering was also recalibrated.

Don’t feel the need to buy too high up the range, because equipment is generous throughout. Top-spec cars get 18-inch wheels and these produce a crashy ride; the 16-inch rims of cheaper models are harder to kerb and provide a more comfortable ride. 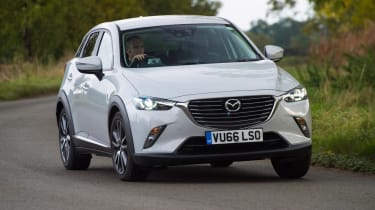 None of the engines is weak, and both manual and auto boxes are slick, so it’s just a question of picking the one you most like. The launch line-up consisted of SE, SE Nav, SE-L, SE-L Nav and Sport Nav, with the SE getting a seven-inch colour touchscreen, 16-inch alloys, cruise control, air-con, DAB radio, Bluetooth and a multifunction wheel.

Alternatives to the Mazda CX-3

The Nissan Juke was the first supermini-SUV. It’s still in production but, as you’d expect, is rather dated. More recent arrivals include the Vauxhall Mokka, Renault Captur and Peugeot 2008; all were launched before the CX-3, and are worth a look, at less than £6,000.

Got deeper pockets? Then check out the Audi Q2. This class act more than gives the Mazda a run for its money but, because it’s newer, you won’t get a used Q2 for much less than £18,000. Other recent alternatives include the Hyundai Kona, Kia Stonic and SEAT Arona – all very easy to recommend.

The CX-3 featured a conventional handbrake until August 2018, at which point an electronic version was fitted.

Many owners have experienced problems with the air-conditioning; dealers have been replacing systems under warranty.

Front-wheel-drive cars have a 48-litre fuel tank, while four-wheel-drive models get a 44-litre tank, despite the fact that they’re thirstier.

If the windscreen washers don’t work the water reservoir is probably empty; there’s no warning on the dashboard to tell you. 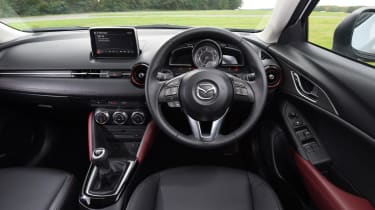 This is a CX-3 highlight; there’s a refined, appealing cabin design with plenty of premium materials. The multimedia system is easy to use, even if it isn’t as slick as some rivals’. Practicality is the biggest issue; the boot can stow just 350 litres with the seats up and 1,260 litres when they’re folded (287/1,197 on 4WD models). Rear headroom is tight, too, but comfort up front is excellent. 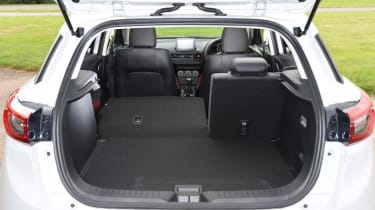 All engines are chain driven, so there are no timing belts to replace, but coolant needs renewing every 10 years/125,000 miles for £100. Brake fluid is required every two years (£95), as is an air-con service (£90). Dealer payment plans are available, although only to cover the first three years or 37,500 miles.

The CX-3 has been recalled four times, the first in May 2017 for possible failure of the boot’s gas struts. Some models made in May 2016 were called back in July 2017 over a faulty brake hose clip. A software fault could lead to engine failure on cars built up to November 2017; an ECU update fixed this. CX-3s made up to April 2017 could suffer an electrical short circuit leading to engine cut-out.

The CX-3 ranked a disappointing 48th in the Driver Power 2018 new car satisfaction survey; poor ratings for practicality, comfort and running costs dragged the score down. But owners were far more enamoured with the ride and handling, along with the exterior design and finish. The infotainment and connectivity are also well thought of. Safety and reliability came mid-table.