CX-5 is fun to drive for an SUV, but improved refinement and comfort makes for one of the best all-rounders in the class

Mazda says this second-generation CX-5 features a “fully revised body structure”, using the firm’s SkyActiv underpinnings. Changes include a 15 per cent improvement in the body’s torsional rigidity, which has enabled engineers to tweak the suspension to offer more comfort, apparently without compromising the CX-5’s trademark engaging dynamics.

All Mazdas offer an agile and fun driving experience relative to their competitors, and the CX-5 is no different. For a tall and fairly heavy SUV, its direct steering, strong grip levels and impressive agility makes cars like the VW Tiguan look like lumbering beasts. You can tell from the way the CX-5 drives that it was developed by the same company who build the MX-5 sports car. 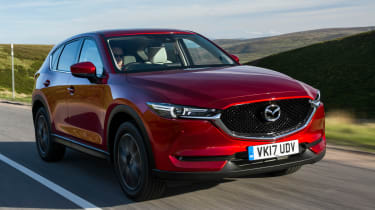 The CX-5’s steering is very communicative. It’s heavier than you'll find in a Skoda Kodiaq or VW Tiguan, but it gently ripples with information – not to the point where it becomes taxing, but just enough to offer you a good connection with the front tyres.

It’s this that gives the Mazda its dynamic edge. The effect of the G-Vectoring Control is so subtle that it’s difficult to feel it working in truth, but the CX-5 certainly turns in sweetly. There’s plenty of grip to lean on, while the suspension takes up a nice amount of roll but controls body movement well.

The Mazda’s damping feels plush and slightly better controlled than some rivals. Only occasionally does it lose its composure. However, the difference is still marginal at normal speeds, and although this makes it the most enjoyable car to drive, around town and on a cruise there’s not much in it.

The CX-5’s two four-cylinder engines are both carried over from the previous CX-5, with several revisions to improve refinement, response and fuel efficiency.

The 2.2-litre diesel is expected to be the stronger seller by a big margin, despite changing attitudes to the fuel. It deserves to be, too – it remains a strong and flexible unit, with gutsy torque delivery and a broad spread of power resulting in even the 148bhp version feeling reasonably quick.

Other advances include Mazda's G-Vectoring Control, which adjusts engine torque on the way into corners to help improve turn-in response, while a newly designed pin that secures the piston to the connecting rod in the engine helps dampen vibration and boost refinement. This dynamic damper cuts engine noise noticeably. The CX-5 is quiet at idle and more hushed on the move, with the extra torque combining with this refinement to deliver a relaxing drive.

When we tested the 150PS-powered CX-5 against a 150PS Skoda Kodiaq and VW Tiguan, the Mazda's punchier engine gave it an advantage in-gear; it accelerated from 30-50mph in fourth and 50-70mph in sixth well ahead of its rivals, in 5.4 and 10.0 seconds respectively. The free-shifting but precise six-speed manual box helped it sprint from 0-60mph the fastest, in 9.1 seconds.

The original 173bhp engine was replaced by a more powerful 181bhp version in 2018, but the effect of its extra power over the 148bhp engine is mitigated by the increased weight of the standard-fit four-wheel-drive system. Still, whichever output you go for refinement is very good, with only a bit of a clatter on start-up which becomes a muted hum on the move.

The 2.0-litre petrol engine is naturally aspirated, unlike most rivals which are turbocharged. But it doesn’t feel as strained as you might expect. With a respectable 210Nm of torque and 163bhp, it manages the 0-62mph sprint in 9.8 seconds. 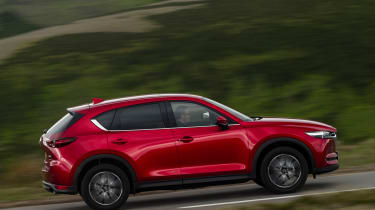 However, the petrol needs to be worked much harder than either diesel to get the best out of it, which works well in a sporty hatch or coupe, but less so in a family SUV where relaxed torque matters. Refinement suffers as a result, too.