We see no reason why the CX-5 would be any less reliable than the old one, while strong safety rating is expected

With an engine range carried over from the last car with only small revisions, as well as plenty of existing tech from the rest of the Mazda car range found throughout the cabin, there shouldn't be much that will go wrong with the second-generation CX-5. However, Mazda’s reliability record isn’t as rock-solid as some Japanese rivals - like Honda and Toyota – but it shouldn't be troublesome.

The CX-5 ranked 14th in the 2019 Driver Power ownership survey, slotting between the Skoda Karoq and Kia Sportage in the ranking. Owners gave the CX-5 generally high scores, with interior comfort, practicality, engines and handling all earning praise. In our latest 2020 poll, the CX-5 climbed to an even stronger 5th position, with reliability much improved.

On the safety front Mazda has made a number of key advances. An increased use of ultra high-tensile steel and underbody structures enhance the car’s strength in an impact without adding significant weight, while Mazda has worked hard on improving pedestrian safety with the front-end design. As a result, Euro NCAP awarded the CX-5 a five-star crash test score in 2017. 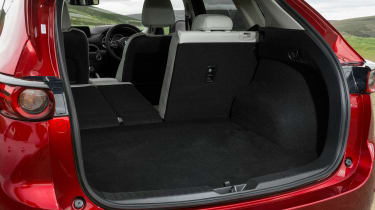 Nevertheless, all models come with six airbags as standard. Isofix child seat points feature on the rearmost two seats, too, but it’s the active safety tech that’s come on most: Advanced Smart City Brake Support (standard on all models) is improved over the old car with a wider operating window and the ability to detect pedestrians.

All Mazdas come with a typical three-year, 60,000 mile warranty. It’s par for the course, but an increasing number of manufacturers offer five or (in Kia’s case) seven-year cover. There’s also a three-year warranty on paintwork, and twelve years cover for rust. There are varying levels of extended cover available to buy, too.

Service intervals for the CX-5 are carried over from the old car, meaning all models require a trip to a garage every 12,500 miles or 12 months, whichever comes sooner. Owners can keep track of their service record via a smartphone app, too. In addition, the company offers a fixed-price maintenance plan, which covers all scheduled servicing parts and labour for the first three years or 37,500 miles. Prices start from around £500, depending on the model.