The simple engine choice for the Mazda CX-5 means that some rivals with a broader spread of powertrains are cheaper to run. SUVs such as the SEAT Ateca and Peugeot 3008 offer downsized petrol engines claiming greater efficiency, but the units in the CX-5 are more frugal than their size would suggest. That’s because of Mazda’s low-friction, low compression SkyActiv engine tech, allowing the performance of a larger engine but, when driven sensibly, the economy of something smaller.

Under the latest WLTP test procedure, the 2.0 SkyActiv-G petrol CX-5 claims up to 39.8mpg combined with the manual gearbox and 36.7mpg for the 6-speed auto-equipped version, although higher spec cars on bigger wheels and with more kit have poorer claimed figures.

The SkyActiv-D diesel also delivers different figures depending on the car's spec. The 148bhp manual model manages a best combined figure of 49.6mpg, while adding the auto box sees this reduce to 43.5mpg. Go for the more powerful diesel, and its standard-fit four-wheel drive sees fuel economy drop even further, with a 42.8mpg figure for the manual model, and 39.8mpg for the auto version.

Emissions for the CX-5 see the petrol car ranging from 163-173g/km, while the diesels are sit between 151-186g/km. However, rivals such as the Peugeot 3008, Skoda Karoq and hybrid-equipped Honda CR-V and Toyota RAV4 are less polluting.

The stronger, safer CX-5 looks to be competitive in terms of insurance costs. The petrol is the cheapest, starting at group 14, which puts it on par with a 148bhp petrol Karoq. The diesels slot into group 19 to 23, depending on which variant you choose. 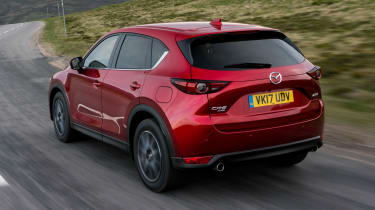 The Mazda CX-5 has residual values in the region of 46-52 per cent, which is among the best in the Mazda range. It's also slightly ahead of cars like the Peugeot 3008 and Nissan X-Trail, and on a par with the Skoda Karoq and VW Tiguan.