The Mercedes CLA Shooting Brake fills a new niche in the market but is it one that needed filling? 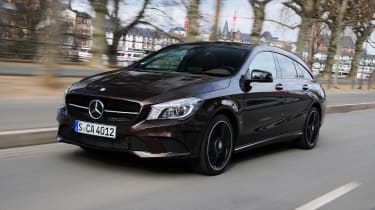 Mercedes has found yet another unexplored niche with the new CLA Shooting Brake, and rivals a sure to follow suit. It drives just like a CLA and although there’s more space, it’s not as usable as we’d hoped. The high price tag means it has to trade heavily on its looks, but a fidgety ride and noisy diesel means it never feels as premium to drive as it looks. That said, buyers looking for a style statement rather than as a functional workhorse will love it.

The Mercedes CLA has always been a car you buy with your heart rather than your head. The sleek looks and sloping roofline compromise practicality and rear seat space, forcing family car buyers to look at more conventional models such as the A or GLA-Class.

However, following the introduction and success of the CLS Shooting Brake two years ago, Mercedes has given the same treatment to its smaller four-door coupe, the CLA, to create the CLA Shooting Brake. 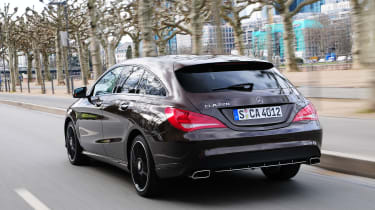 So does this mean the CLA is now a car that can tick all boxes for all people? Not quite. While the 495-litre boot looks good on paper, the tight aperture means the opening is narrow, while outright practicality is far surpassed by boxier models like the Volkswagen Golf Estate or Honda Civic Tourer. That said, Shooting Brake buyers are able to specify a Load Compartment Package, which allows a more upright positioning of the rear seats and increases load volume by 100 litres.

Space in the back has improved though, with 40mm more headroom for rear seat passengers. Taller people will still find their knees rubbing on the seats in front and their heads brushing the ceiling, but it’s noticeably more accommodating on longer journeys. The seats fold flat to reveal 1,354 litres of space, but that roofline will severely impinge on any truly bulky loads. 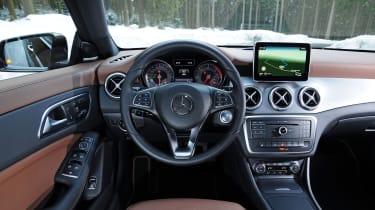 Up front the seats feel supportive and well bolstered – especially on our AMG Line test car, with plenty of adjustment for height, as well as decent lumbar support for the lower back. The dash has been lifted straight from the CLA saloon, and offers all the usual Mercedes luxuries. The brand’s synonymous iPad-style screen and column-mounted gearshift are also present, as is the chunky leather-wrapped steering wheel. On the move, the Shooting Brake feels much like the standard CLA. The ride is crashy on the bigger wheels, and even the standard suspension has a habit of fidgeting around on all but the smoothest surfaces. What’s more, the electronic power steering lacks feel at higher speeds and leaves you with little idea of where the front wheels are pointing. Worse still, is rear visibility. Despite the blindspot monitoring fitted to our test car, due to the sloped rear quarter windows, it’s extremely difficult to spot other vehicles as you pull up a motorway slip road or out of a tricky junction. The tiny rear screen doesn’t improve things either, though you can of course spec a reversing camera for help when parking. 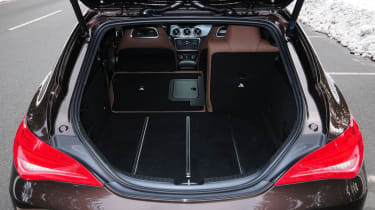 Automatic models like the 220 CDI we drove come with a seven-speed DCT – with Eco, Sport and Manual modes. This remaps the engine and gearbox for increasingly-urgent responses. Leave it in Eco mode and the dual-clutch ‘box will switch smoothly through the gears, but change it to Sport and it holds on to each ratio – often for longer than desired. You can always flick up a gear using the steering wheel-mounted paddles, but VW’s DSG feels slicker and better refined. In terms of engines, Merc reckons this higher-powered 175bhp 220 CDI diesel will be more popular with private buyers, while company car drivers are likely to favour the even more economical 134bhp 200 CDI, with CO2 emissions as low as 101g/km. We didn’t get to try the 200 CDI on the international launch, but when you consider it costs £1,400 less like-for-like, we wouldn’t bother stepping up to the faster car.

The 220 CDI uses the same 2.1-litre diesel engine, albeit in a higher state of tune, but is noisy under acceleration and clattery at idle. That said, it pulls well and settles down on the motorway. BMW’s equivalent motor is a much more rounded engine though, offering impressive performance with rock-bottom running costs and better long-distance refinement. 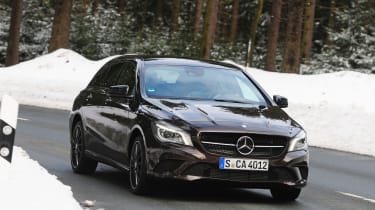 There are four trims to choice from: Sport, AMG Sport, OrangeArt (adding orange accents for the wheels and aprons, as well as on the seatbelts, floor mats and seats) and Engineered by AMG. All CLAs come with 18-inch alloy wheels, active park assist, ambient interior lighting and cruise control, but our AMG Sport model, also boasted xenon headlamps, privacy glass and lowered suspension. Mercedes bosses say this Shooting Brake is expected to outsell the saloon, which has currently sold 100,000 units worldwide and 8,500 in the UK since going on sale in 2013. Yes it has a  distinctive style all of its own and it’s more versatile than the standard CLA, but so is a C-Class. And a similarly specced C-Class Estate with the newer BlueTEC engine is only around £3,000 more and will cost a similar amount to run. What’s more, it’s faster, better to drive and has room for all the family.