Entry version of saloon delivers both luxury and efficiency. 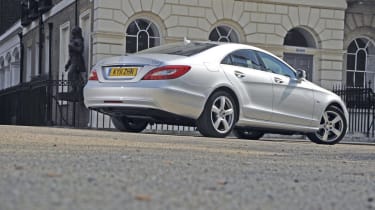 The fact that Mercedes has put a four-cylinder diesel in one of its most luxurious models proves that the downsizing trend is here to stay. The resulting economy is very impressive for a car of this size, and few owners will feel short-changed by the base variant as it delivers 90 per cent of the CLS experience with a fraction of the running costs. Yet the lack of overall refinement intrudes on the otherwise polished drive, and means this won’t be the pick of the range. At £46,350, it’s pricier than its rivals, too.

We were hugely impressed with the six-cylinder CLS 350 we drove in Issue 1,158. However, Mercedes has now introduced a new four-cylinder diesel version, which promises to combine the looks and performance of a luxury German saloon with the low running costs of a much smaller family car.

Sitting under the sculpted bonnet is the first four-cylinder engine ever fitted to a CLS, but despite its smaller size, it’s no slouch. The twin-turbo diesel produces 204bhp and 500Nm of torque, propelling the car from 0-62mph in 7.5 seconds and on to a 150mph top speed.

However, the superb economy and emissions figures are even more likely to catch the eye: the 250 CDI will return 54.3mpg on the combined cycle, and puts out only 135g/km of CO2.

Yet despite the incredible efficiency, this entry-level car looks every bit as striking as more expensive models. Its SLS-inspired grille and muscular rear arches set it apart from more conservative rivals such as the Porsche Panamera.

It’s the same story inside, where the combination of high-class materials such as wood and aluminium, plus the armchair-like leather seats, makes it a truly luxurious place in which to spend time.

On the move, the beautifully cushioned ride only enhances this feeling of effortless quality. Coupled with the super smooth seven-speed gearbox and well weighted controls, it makes the CLS an accomplished cruiser.

There are some drawbacks to downsizing, though, as the new engine can’t match the refinement of the V6. It’s still very quiet at low revs, yet becomes gruff and intrusive above 3,000rpm when you are getting up to speed.

Another irritation is the automatic stop-start system. It worked well on the petrol model, but cuts in far too early in this variant, making the car tricky to manoeuvre through slow traffic. Fortunately, it can be turned off. That gripe aside, this is the car which proves massive luxury doesn’t have to mean massive fuel consumption.