The Mercedes E-Class V6 diesel is a compelling choice, but it's pricey 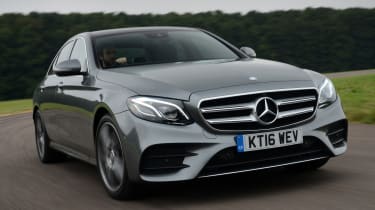 The Mercedes E 350d is fairly expensive, but it’s still a fantastic car and one of the best executive saloons out there. The 3.0-litre V6 diesel is smooth and powerful, giving an extra layer of luxury over the impressive interior and ride quality that the E-Class range brings. This model gets choice options such as the brilliant air-suspension as standard, too. An E 220d remains our pick, though, as it’s cheaper to run and offers better all-round value.

The Mercedes E-Class is our favourite large executive saloon, with the entry-level 2.0-litre E 220d our current pick of the range. Now we’ve tried the more powerful (and more expensive) E 350d version on British roads. Is it worth the extra cash?

On the road it feels particularly quick, with that huge lug of torque meaning in-gear performance is superb. The low growl from the V6 motor isn’t particularly pleasant, but it’s much smoother and more appealing than the slightly rattly four-cylinder E 220d. 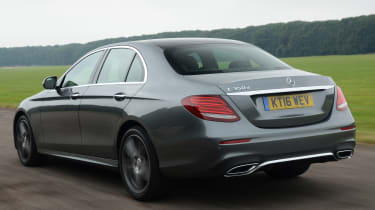 The nine-speed automatic gearbox changes smoothly, although it does occasionally throw in a lumpy shift.  Using the paddles behind the wheel engages manual mode, but the gearbox  is still too keen to change ratios for you  and the full manual setting is hidden  in the settings on the display screen.

It’s on the motorway where the E 350d excels, though. This is the natural habitat of any large executive car, and like its slower sibling, the V6 diesel is remarkably quiet at speed, making it a hugely comfortable car to travel long distances in. The air-suspension, which is standard on this model, smooths out the roughest road surfaces very  well, and even on this car’s huge alloy wheels it’s a very capable cruiser.

That comes at the cost of body control  in fast corners, although you can stiffen  the suspension by using Sport or Sport+ driving modes. It still feels heavy, weighing in at 1,800kg, and the steering doesn’t  have much feel. It’s not as engaging to  drive as a Jaguar XF or BMW 5 Series,  but it’s still fun on the right road.

We’ll definitely forgive the Mercedes for that, though, as the interior is miles ahead of its rivals. The twin 12.3-inch display screens that show the speed, sat-nav  and infotainment look brilliant, are easy  to use and feel very upmarket. This set- up costs £495 but is well worth it.

The interior looks and feels great, with leather trim and soft-touch plastics. The excellent seats are highly adjustable and there’s lots of rear legroom, while our car’s sunroof made it feel more spacious inside. 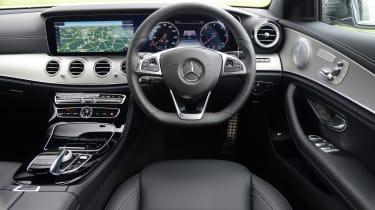