Powerhouse Mercedes E-Class flagship gets 4WD to tame its 604bhp V8, but can it beat the best? 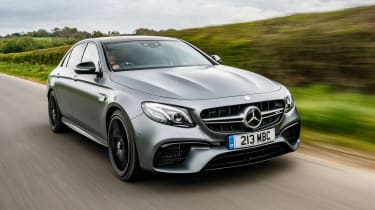 For decades Mercedes-AMG’s rival to the imperious BMW M5 has impressed and delivered enough to give the BMW the odd bruise, but never delivered a knockout blow. Until now. The new E 63 S is such a complete all rounder and untouchable in every area from dynamics to refinement that it redefines what is expected of today’s super-saloon.

With BMW’s new all-wheel drive, 600bhp M5 still some weeks away from its reveal and longer still before we drive it, Mercedes-AMG’s new E 63 S has the opportunity to securely cement itself at the top of the super saloon pile before its nemesis from Munich arrives.

This new E 63 S wants for nothing in preparation for taking on the M5. Mercedes calls the E-Class the most intelligent executive saloon and AMG has transformed the E 63 version into the most powerful variant of all time, too. In range-topping S spec, as tested here in the UK for the first time, its 4.0-litre twin-turbocharged V8 produces 604bhp and 850Nm of torque. Suspended by active dynamic engine mounts, the revised V8 is mated to the latest nine-speed AMG Speedshift automatic gearbox and it will sprint to 62mph in 3.4 seconds; with the optional AMG Driver’s Package fitted (£765) it will crack on to 186mph.

If you are thinking the E 63 S’s turbocharged V8 is little more than a tweaked version of the motor fitted to the C 63 S, think again. AMG has replaced the pistons, optimised the air intake and charge air cooler before reprogramming the engine’s ECU software. On top of this, the V8 now features cylinder on demand technology, which cuts down to four-cylinders when driving conditions allow in Comfort mode. 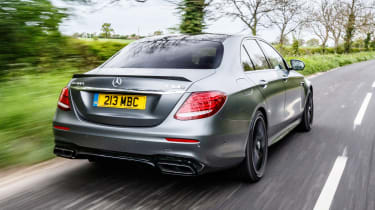 Perhaps the biggest mechanical change is the adoption of four-wheel drive, a first for the UK-bound E 63 (other markets have been offered it on previous versions). Equipped with Mercedes’ latest 4MATIC+ system it continuously adjusts torque to the axle as required, and should you delve into the car’s traction control settings you can turn your E 63 S back to a rear-wheel drive saloon once more by selecting Drift mode. Do that, though, and you’ll have to change gear yourself using the excellent paddles behind the steering wheel and drive round without an electronic safety net in a 1,950kg saloon with over 600 horsepower.

There is, however, an electronically controlled limited-slip diff in the rear axle to help you out, too. Underpinning the E 63 S are coil springs with AMG’s ride control air suspension, 20-inch wheels are standard and our test car was also equipped with £6,995 worth of ceramic composite brakes.

There’s always a concern that a car that felt unbreakable on its carefully stage-managed international launch will crumble when it arrives in the dreary UK and is asked to take on a network of roads that are more patchwork quilts of ill-fitting tarmac than the billiard smooth surfaces expected in the 21st Century. However, this just doesn’t appear to apply to the E 63 S.

The multiple driving modes – Comfort, Sport, Sport +, Race and Individual – offer an array of options when it comes to engine mapping, suspension settings, gearbox shift speeds, the response of the diff and ESP, and the exhaust note. In the UK it’s the Sport setting that allows you to extract the E 63 S’s stunning performance most of the time. 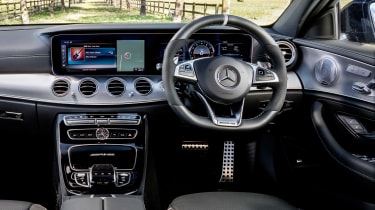 The stiffer suspension setting delivers a degree of tautness to the body control that gives you the confidence to exploit the performance on offer, delivering a sharpness and poise wholly unexpected of a near two-tonne car while all the time managing to smother imperfections.That it also brings that honking V8 to life is an added bonus, with a crispness to the throttle response that has you questioning if this engine is turbocharged at all. You also question if it has a four-wheel drive chassis, with the system working seamlessly and discreetly distributing power and torque where they are required with no interference working its way back to the driver.

Combine its peerless powertrain and razor sharp chassis to an interior that raises the quality to a level Audi will be jealous off – and praise be, a driving position that doesn’t make you feel like you are sat on a bench – and, in the E 63 S, you have the very best super saloon available. Over to you, BMW.