Firebreathing Mercedes-AMG SL 63 roadster promises much, but does it deliver fun behind the wheel? 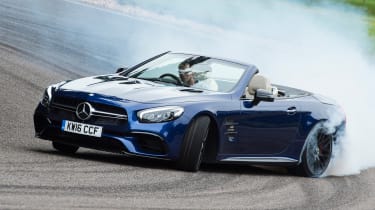 The AMG SL 63 sits rather strangely in the Mercedes line-up. It’s more powerful and expensive than the super-focused AMG GT, but it can’t come close for handling or driver fun. If you’re after a brawny, two-seat, drop-top muscle car, then the SL certainly fits that brief, but our drive on British roads showed up its imperfections – shimmying and shaking on rough tarmac. The Porsche 911 is a more rounded product, and will put a smile on your face when the occasion dictates.

We drove the facelifted Mercedes SL in the UK back in May. The V8-powered SL 500 is the mainstay of the roadster range, and has featured in the line-up in one form or another for more than three decades. However, if 4.7 litres and 449bhp aren’t quite enough for you, you’ll want to know how the firebreathing AMG-fettled SL 63 fares on British roads.

On paper, the sizeable power jump to 577bhp seems somewhat trivial when all it appears to offer is a marginal gain in acceleration (0-62mph in 4.1 seconds, versus 4.3 seconds for the SL 500) and an identical top speed. But in reality, the SL 63 is a totally different beast.

Mercedes will tell you that while the SL 500 is the cruiser, the AMG SL 63 is the sports car. The power of this drop-top surpasses the brand’s own 503bhp AMG GT S supercar. But on the road, the three cars couldn’t be more different. The SL 63 has always been a bit of a bruiser, and these modifications do little to change that. 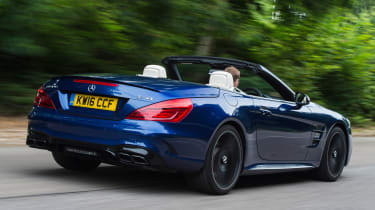 Switching off all the driver aids and flooring the throttle will result in clouds of blue smoke as the rear wheels struggle for traction. With a more gentle touch, the huge tyres dig into the tarmac and fire you down the road with a suitably pleasing howl from the accompanying twin-turbo 5.5-litre V8. It’s a similar story in the corners, where it’s all too easy to light up the rear rubber with careless throttle application. It’s secure enough with all the systems switched on, though.

Lower the roof and that addictive soundtrack will leave your ears ringing. The exhaust pops and bangs on the over-run, while the quick-shifting seven-speed MCT box allows rapid multiple changes. Select a lower gear on the approach to a tight bend and the V8 will growl as the revs crescendo.

The steering is a little light for our liking and a little vague around the straight-ahead. On faster, wider curves, the SL is perfectly placeable, though, feeling much lighter than the V12-engined SL 65. But it’s the way the SL bumps and shakes that disappoints most. You don’t buy an AMG to waft; you buy one because it represents the pinnacle of the brand’s engineering. The SL 63, however, seriously struggles with bumpy road surfaces, and even with the roof in place it sends shocks into the cabin over the smallest ruts or ridges.

This wasn’t evident when we drove the car on smooth Californian highways in the spring, but UK road surfaces do nothing for the SL’s stiff set-up. It shimmies and shakes over rough tarmac, and feels much looser than the brilliant fixed-roof AMG GT.

Firming things up with the Dynamic Select switch only makes things worse, with the Sport+ setting all too firm for our tight and pitted British roads. Pleasingly, there’s an Individual setting, so you can select the most aggressive engine response with the softest damper settings. We found this to be a workable compromise. 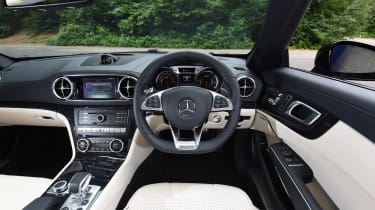 So the SL 63 is better suited to boulevard cruising than a back-road blast, and on the motorway it comes into its own. The V8 ticks away in the background, while the electric wind deflector blocks out all but the strongest gusts. Not only can you arrive at your destination in style, you’ll also be unruffled.

All models gain small tweaks to the grille and headlights, while the beautifully trimmed cabin comes complete with Nappa leather seats, Apple CarPlay and an IWC clock on the dash. Our car’s AMG-styled exterior was subtly purposeful, with huge wheels, a unique bodykit and quad exhausts.

While many may find it difficult to justify the near-£35,000 jump from SL 500 to SL 63, the £59,200 premium Mercedes asks for the even more powerful SL 65 is unfathomable. Not only is that car heavier, it’s barely any faster, and it’s immeasurably thirstier and indistinguishable to the untrained eye.