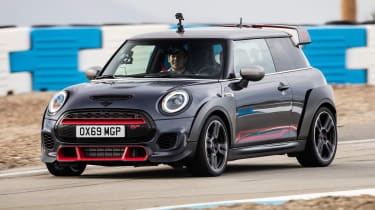 If the Mini Cooper is the original pocket rocket, then the GP version of the reborn MINI is the Saturn 5, with horsepower to spare and a top speed that will make your eyes water.

The 302bhp machine has no electronic leash to keep its top speed in check, meaning it can charge all the way to 164mph. But part of the appeal of the two past GP models has been how fun the hottest MINI feels, and not just how fast it goes in a straight line. So Auto Express hopped aboard one of the first pre-production models for a hot lap ride.

It looks fantastic, for all the world like a TCR touring car. Each car bears its number on the front wheelarch extensions, which are fashioned from carbon-fibre reinforced plastic of the sort found in the BMW i3. Those arches allow for 40mm of extra track compared with a JCW hatch, while the ride height has been lowered by 10mm and the passive dampers and the suspension geometry has been turned specifically for the GP.

The front seats grip you in all the right places and the GP’s unique digital display for the driver is a neat touch. As before, there’s only one passenger seat in the GP, as the back seats are dispended with to save a little weight and allow for the fitment of structural bracing, with a bright red bar spanning the void. 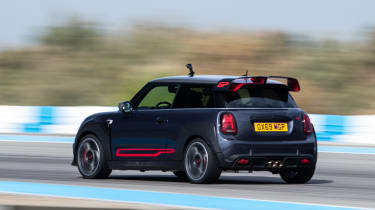 Predictably, the GP gobbles up the track at Thermal Raceway, in California, with a seemingly insatiable appetite. But the 302bhp engine remains just a tad characterless and nothing like the first GP’s manic little supercharged 1.6-litre unit. With such a flat torque curve speeds builds in a predictably linear fashion, and there isn’t a rush toward the rev limit.

The most notable characteristic is the GP’s rigid structure. With a front strut brace, the brace in the back of the cabin and strengthening beneath the back of the car, the robust structure feels as though it gives the car more immediate responses. And the level of grip on the semi-slick Ventus TD tyres is extremely high. Only a drive will reveal whether the return to a mechanical limited-slip differential will make the third GP the best yet.

Despite going to the lengths of throwing away the back seats, the GP is only 10kg lighter than a JCW hatch. That’s because of the bracing, larger brakes (shared with JCW Clubman and Countryman models) and changes to the cooling systems, as well as the eight-speed automatic gearbox.

A manual gearbox would have been a welcome feature, given this of all Minis is meant to be about having a hoot behind the wheel. A total of 3,000 GPs will be built at MINI’s Oxford factory, with 575 for the UK market, and around half of those are accounted for already. But for now this taster has whetted our appetite for a full-throttle drive in the near future.