Hardcore MINI JCW Challenge is great to drive, but it's very expensive 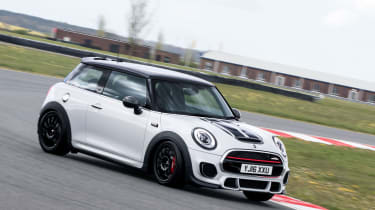 The MINI John Cooper Works Challenge is great fun on track, with the upgrades fitted by MINI UK making a significant improvement to an already accomplished car. For most, it'll be hard to justify the extra money, but hardcore MINI fans will love this extra special model.

The MINI John Cooper Works Challenge is a limited-edition version of the standard JCW hatch, with some track-focused upgrades to make it even better to drive. It's strictly limited to the UK, having been developed by a small team at MINI's UK headquarters – along with representatives from Auto Express sister title, evo.

The headline changes are the Michelin Pilot Sport Cup 2 tyres, adjustable springs and dampers, a Quaife limited-slip differential, lighter wheels and more powerful brakes. There's an aero kit to add downforce too. We got the chance to try the car back-to-back with the standard John Cooper Works, and there's no doubt that those upgrades make a really significant difference on track.

There's more grip thanks to the new tyres, and the track-focused set-up is obvious when you approach a corner. It's keener to turn in, with the more powerful brakes letting you brake later. The limited-slip diff works well, too, letting you get on the power earlier as you exit the bend. 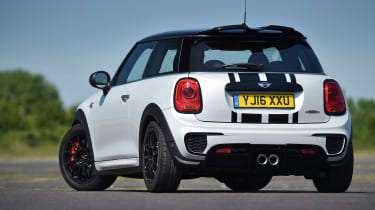 Despite being front-wheel drive, it’s been set up to serve up more oversteer than the standard JCW hatch, so there's a more playful feel, too. The JCW Pro exhaust, with a Bluetooth controller, adds even more fun to the mix, crackling and spitting even more than the already over-the-top JCW.

The engine is no different, though. It's the same 228bhp 2.0-litre four-cylinder engine with 320Nm of torque, which takes the JCW from 0-62mph in 6.3 seconds. MINI reckons the stickier tyres on the Challenge will mean it's a bit faster in that sprint, though. 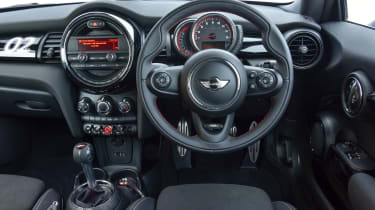 So while only a handful of updates doesn't sound like much, if you regularly take your car on track then the JCW Challenge is a joy. However we'll have to reserve ultimate judgement until we try the car on the road, but the tight body control suggests that the ride might be on the firm side.

Inside, each car gets a unique build number on the dashboard, which will be a neat addition for buyers of this very limited-run model. You can’t choose any options with the car, but you do get all the kit from the base JCW model as standard. You don't get sat-nav, however, and for £32,000, many will expect quite a bit more equipment.