The new Mitsubishi Eclipse Cross SUV is designed to pinch sales from the SEAT Ateca and Peugeot 3008. How will it fare? 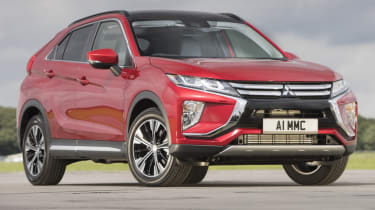 The new Mitsubishi Eclipse Cross is handsome, has a neat interior and delivers a relatively composed drive. There’s lots of space inside, but the weak link is the powertrain. The 1.5-litre engine is punchy and smooth, but the CVT gearbox means it’s noisy and no fun to drive quickly. The diesel model should show the Eclipse Cross in a better light, as the Mitsubishi really does have potential.

Mitsubishi says that its new Eclipse Cross, a mid-size SUV taking on the Toyota C-HR, SEAT Ateca and Peugeot 3008, is the start of something totally new. It’s a rethink on how the brand approaches its new cars - and the aim with the new model is to steal customers from the other big names in the market.

Whether they achieve that really depends on what it’s like - and we’ve had an early drive in the new car to find out. The Eclipse Cross fits into the range above the ASX and below the Outlander, and features a brand new 1.5-litre petrol engine, with a 2.2-litre diesel coming later down the line.

• These are the best 4x4s and SUVs you can buy

The first thing you’ll notice about the Eclipse Cross is that it’s a very smart-looking car, at least from the front. The angular nose, sloping roofline and rising shoulder-line give it a sporty stance, more like a Toyota C-HR than a Nissan Qashqai. 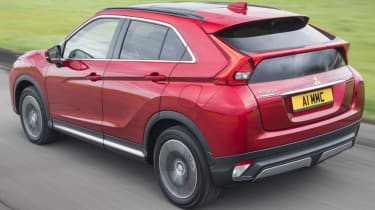 The split rear windscreen allows a steep angle on the top part of the glass without hindering visibility too much, but it looks awkward when you look at the car from the back. On the whole we really like the way the car looks, though.

It’s smart on the inside as well, and feels like a genuine step forward over the ASX and Outlander models in terms of styling. The centre console feels high quality and has a faintly Lexus feel to it, and even though the large pieces of black plastic on the dash look a little dull they are soft to the touch.

A seven-inch display is fitted to all cars on top of the dash, and it’s a rather good system. The touchscreen is responsive, the graphics look modern and it’s easy to use - it’s certainly better than the system in a Nissan Qashqai, though European rivals such as the 3008 and Ateca still have better systems.

There’s also no sat-nav, which is a shame, but you can link up your phone through the standard Apple CarPlay and Android Auto, both of which work well. It’s still a pain to spend money on data when you need the mapping, though, and not all buyers have compatible phones. 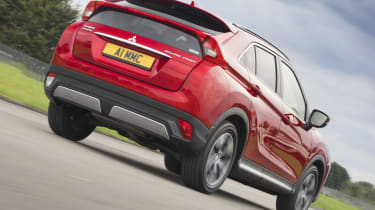 You sit fairly high up in the car, but the seats are comfy and supportive and the driving position is pretty good. There’s enough headroom even with our car’s sunroof fitted, although in the back taller adults will notice that sloping roofline. There’s lots of legroom back there, as the seats can be slid back to create more space.

The Eclipse Cross feels settled on the motorway, and on the smooth Spanish roads where we drove the car, but at low speed the ride is on the firm side, though it’s not as stiff as the SEAT Ateca. Potholes and larger bumps in the road do crash into the cabin, however.

Around a series of bends, though, the Mitsubishi impresses. The steering is a little light and numb, but it’s quick and direct. It doesn’t roll into the corners nearly as much as the Outlander it shares a platform with, and four-wheel drive means there’s plenty of grip. 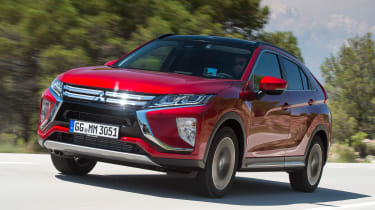 A system called Super-All Wheel Control can control the driving and braking forces on all four wheels, sending power where it’s needed automatically. It can even send up to 60 per cent of the power to the rear wheels when set to snow mode.

It’s no match for the sharp SEAT Ateca, but the Eclipse Cross feels well sorted on the road. Unfortunately our test car’s powertrain put a dampener on the fun, mostly thanks to the CVT gearbox.

If you only ever drive in the city, the efficient CVT will potentially work well, but as with most other CVTs once you put your foot down the revs soar. This one feels like it’s been designed to mimic a normal auto gearbox, but that makes it into the worst of both worlds: it slurs its ‘shifts’ while still holding revs unpleasantly high for too long.

Beautiful fixed metal paddles behind the steering wheel give access to a manual mode, but the box is horribly unresponsive to your inputs so it’s best to stay in auto mode. Luckily there is a manual gearbox option from launch, though, we’ve not been able to try it yet. 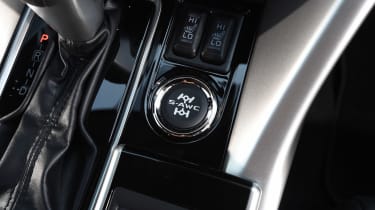 Certainly the 1.5-litre engine feels like it will work best with proper control of the gears. It’s quiet and smooth at low revs, and feels punchy thanks to its 250Nm of torque. At higher revs it’s noisy, though.

Economy of 40.4mpg isn’t great either, and there are no other engines available at launch. A 2.2-litre diesel will join the range later, and will come with an eight-speed automatic rather than the CVT. Mitsubishi is also working on an electrified version, but it won’t be a plug-in hybrid like the Outlander as that was thought to be prohibitively expensive - it’s more likely to be a standard hybrid.