The new Mitsubishi Eclipse Cross Black Connected arrives to sit at the top of the SUV's range, but is it worth the extra money? 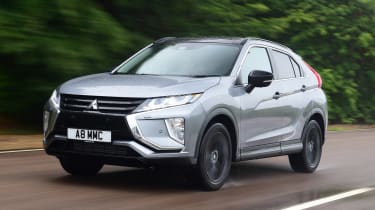 In a class where there are so many talented options, the Mitsubishi Eclipse Cross Black Connected edition struggles to stand out. While it’s spacious inside, and the sliding rear seat bench adds to its practical appeal, there are simply too many compromises elsewhere. It’s too thirsty, too fidgety, and too vague to drive. In top-spec trim, it’s hard to recommend; those who really want an Eclipse Cross would be better off saving the best part of £10,000 and choosing the entry-level car.

This is the Mitsubishi Eclipse Cross Black Connected. The new trim level sits at the top of the brand’s family SUV line-up, designed to compete against snazzier versions of the Nissan Qashqai, Peugeot 3008, and our favourite family SUV, the Skoda Karoq.

As the name suggests, the Black gets some moody-looking accessories to help it stand out from the lesser Eclipse Cross variants. The usual silver front and rear skid plates are painted black, and there’s also a black finish for the front grille, door mirrors, door trims and 18-inch alloy wheels. There are three exterior colours to choose from: white, grey and black. 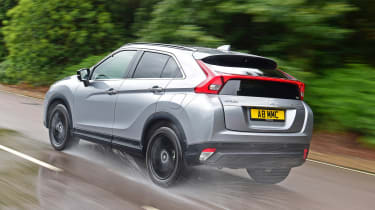 All of this kit is crammed into a cabin that looks smart enough, and one that’s a step up in style and functionality compared to Mitsuibishi stablemates like the ASX. The dash top is soft to the touch, but elsewhere there’s plenty of hard, scratchy plastics. There’s a few too many random finishes, too; the window switch surrounds are covered in fake carbon fibre trim that isn’t found anywhere else, for example, which makes it feel a little fussy. It’s all solidly screwed together, though, and the front seats are very comfy.

The ‘Connected’ part of this trim level’s name hints at an uprated infotainment system. While the units in other Mitsubishis feel like clunky aftermarket add-ons, the unit in the Black Connected looks sharp, and is responsive to touch inputs. You’ll need a smartphone with either Apple CarPlay or Android Auto though - there’s no built-in sat-nav - but otherwise it gets the job done. This considered, it’s a bit annoying that the shelf below the screen isn’t quite big enough for a modern device - especially if you plug a USB cable in to it.

As with other Eclipse Cross models, practicality is a bit of a mixed bag. The inclusion of a rear sliding bench gives the Mitsubishi something unusual in this class, and it’s easy to use via a couple of levers beneath the seats. Legroom is great when the bench is set to its rearmost position, but it comes with a compromise; like this, the boot measures just 341 litres - less than a Volkswagen Golf.

You can slide the seat all the way forward if you need more storage space, but that forces the rear passengers to keep their knees up by their ears – ears that themselves will almost be brushing the ceiling, as the panoramic sunroof eats into headroom. With the seats as far forward as they go, the volume is still only 448 litres - a Skoda Karoq, despite being 23mm shorter than the Eclipse Cross, offers 521 litres. The Skoda has ample cabin space, too. 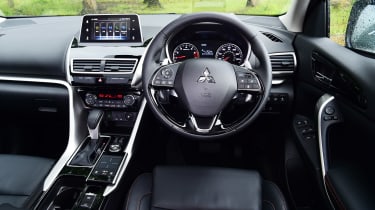 Of course, you can get around the lack of sat-nav, and you won’t be loading up the car to the brim with people and things every day, but it’s out on the road where the Eclipse Cross really struggles against the class leaders. The ride does a decent job of dealing with big bumps, yet it constantly fidgets around over rougher surfaces, even at motorway speeds.

And at higher speeds, problems with the steering begin to present themselves, too. The rack feels vague, which means that it demands constant corrections to keep the car pointing in a straight line. Not only does this not instill much confidence on a twisty road, but it’s something that will become tiring on a longer run.

Power comes from a 1.5-litre turbocharged petrol engine, and buyers can choose from a front-wheel drive model with a manual gearbox or the four-wheel drive version with an auto driven here. The auto gearbox is a CVT unit, but one with artificial steps to make it behave more like a conventional box. In practice, it works reasonably well; it largely removes the droning effect under acceleration that usually hampers a CVT’s refinement, yet settles down to minimal revs at a cruise. It’s possible to take control with steering wheel-mounted paddles, which respond quickly. 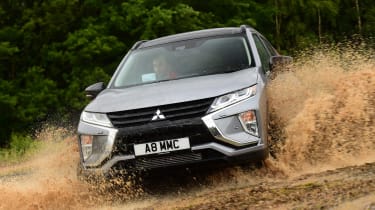 Smooth though the gearbox is, the powertrain falls down in two key areas: performance and economy. A Skoda Karoq powered by a 1.5-litre turbo, mated to an auto gearbox and four-wheel drive, takes almost a second and a half less to accelerate from zero to 62mph.

As for the thirst, the Eclipse Cross is achieves 32.5mpg in official tests, but even that is a number we struggled to match in the real world. Whether driving in town or on motorways, or cruising along a country road, consumption stayed pretty consistently in the mid-twenties. CO2 emissions of 175g/km puts the Eclipse Cross in the top 37 per cent bracket - five bands higher than the Skoda.

And then there’s the price. This model costs a smidge over £31k. There isn’t a free colour option on Black Connected trim, so you pay at least £555 on top of that. To put that into perspective, the Karoq 1.5 TSI 4x4 auto costs £30,990 in Scout trim; a car that is more spacious, faster, comfier, quieter, cheaper to run, more fun to drive, and with a slicker infotainment system.