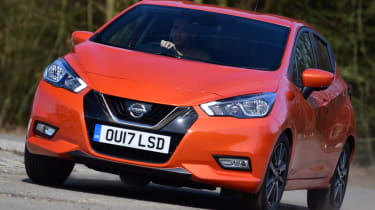 With its sweeping lines, floating roof and angled bonnet, the fifth-generation Micra is certainly striking. It’s a revolutionary look for the car, and it’s easy to see just how different this Micra is from the dumpy previous model. There’s something of the Renault Clio about it too, with the hidden rear door handles being an obvious parallel with a car that shares plenty of tech under the skin.

Get inside and the changes are similarly huge, with a high-quality feel in evidence throughout. The contrasting colour schemes are optional, and will appeal to drivers looking to make more of a statement, but overall the design is neat and smart. The material quality is high as well, with soft-touch finishes in all the right places, although there are some cheaper bits lower down. It's fairly reminiscent of the Qashqai in terms of displays and button layout, and is pretty easy to get on with.

Nissan has gone big on customisation options this time round, and you can choose plenty of contrasting colours for the interior – and also decals and coloured inserts for the exterior as well. There are even inserts on the alloy wheels that allow further personalisation opportunities.

Apple CarPlay comes as standard on the Acenta version, but sat-nav with traffic information comes as part of the Vision Pack (about £700), which adds NissanConnect touchscreen navigation. This is standard on Tekna cars. 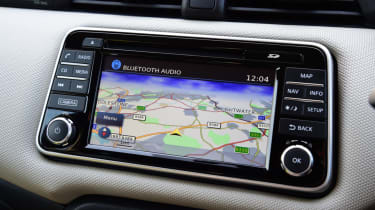 The smartphone integration is nicely done, with Apple CarPlay giving you access to apps that allow music and entertainment on the move, as well as the ability to use Siri voice control from your smartphone to perform simple local searches using Apple’s Maps app. The most recent update also added Android Auto, so rival smartphone users have the same user-friendly features at their disposal.

The seven-inch screen’s graphics aren’t of the highest calibre. However, with hot keys flanking either side of the display, it’s easy to jump to different sections of the infotainment system. It’s also worth mentioning that Nissan offers a £500 Bose stereo upgrade, which features speakers in the headrests and plenty of power for a supermini sound system. This is a neat set-up, and adds extra quality to the car's stereo without resorting to cranking up the volume.