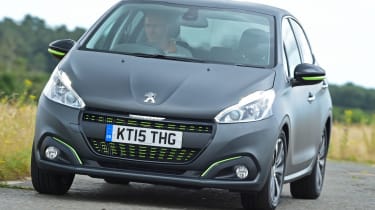 It's due to be replaced in 2020, so while the 208 is old, it has been tested under the latest WLTP fuel economy assessment.

If you do a lot of town driving, it’s probably the petrol models that will suit you best. They’re cheaper and fairly economical in the urban environment. All petrol cars (except the flagship GTi) emit 106-133g/km of CO2 depending on power output, wheel size and gearbox choice.

The diesels do cost more money to buy new than the petrols but could make sense if you do a lot of miles, because they’re more economical. The later 1.5 BlueHDi has CO2 emissions ranging from 86-97g/km, which are among the best you'll get under the new WLTP test.

While the older 1.6 BlueHDi had an official average fuel economy figure of 94.2mpg, which made it the most economical non-hybrid car on sale in the UK, that figure was achieved under the more favourable NEDC test cycle. The 1.5 BlueHDi has quoted combined fuel economy ranging from 55.6-67.7mpg, which is still among the best economy of any non-hybrid model for sale today.

Petrol-powered 208s are a little cheaper to insure than their equivalent diesels. The base model is in group 11 for the 1.2 PureTech 82 and group 12 of you go for the Tech Edition. The rest of the range is in group 18, whether you choose petrol or diesel power. Meanwhile, the hot GTi is in a sports car-like group 33E.

Initial residual values have tailed off as the 208 has been usurped by newer rivals. Our experts predict that the Peugeot will retain 33-36 per cent of its value after three years, one of the poorest figures in the supermini class. In comparison, the 208 don’t do as well in terms of value retention as crossovers like the 208’s sister model, the 2008, which is in the 40 per cent range.