Excellent fuel economy and low emissions make the Peugeot 308 one of the stars of the family hatchback market. No engine has emissions greater than 150g/km, and the diesel versions stand out most. The 1.5 BlueHDi 130 carries on where the older 1.6-litre diesels left off in terms of efficiency.

The BlueHDi 100 has emissions of 98g/km and claimed economy of 76.3mpg under the latest WLTP test regime, but it's not the most efficient engine available. That accolade goes to the more powerful BlueHDi 130 engine, which in Active trim with smaller wheels manages 80.7mpg and 93g/km of CO2. Adding the EAT8 auto doesn't harm the figures too badly, either, with claimed economy of 78.5mpg and 94g/km emissions. These figures aren't as good as the older 1.6 BlueHDi models could manage, but that's because they are tested under different conditions, and real-world MPG will be similar to before.

The 2.0-litre BlueHDi 180 with auto box has claimed economy of 64.2mpg, plus emissions of 116g/km, which is still pretty healthy for a powerful diesel. 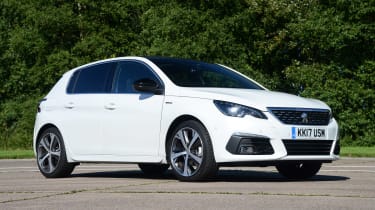 The petrol engines are pretty impressive, too. The PureTech 110 manages up to 57.6mpg, while emissions are as low as 113g/km. Go for the 130 version, and 56.5mpg is achievable, and emissions rise only slightly to 116g/km.

Even the higher-performance 1.6 PureTech delivers strong efficiency. The PureTech 225 has a claimed average of 49.6mpg and emits a fleet-friendly 132g/km of CO2, while the 308 GTi claims a highly un-hot hatch-like 43.5mpg and 148g/km emissions.

There’s a broad line-up of 308 models, and a wide range of insurance groups as a result. They start at group 15 for the entry-level PureTech 110 in Active trim. PureTech 130 versions start at insurance group 19.

For petrol engines, there’s then a big jump to the 1.6-litre PureTech, reflecting its much stronger performance. The PureTech 225 is in group 27 and the GTi sits in group 36.

Diesel versions will have steeper premiums than their petrol equivalents, perhaps because insurers feel their higher-mileage drivers pose a greater risk. The BlueHDi 100 kicks things off in group 18, with the high-powered BlueHDi 130 starting at group 21. The BlueHDi 180 EAT8 GT weighs in at group 29, which is high for a diesel.

Unlike some older Peugeots, the 308 holds on to its value reasonably well, although some hatchback rivals are better in this regard. On average, it retains around 39 per cent of its new list price after three years, and there’s not much difference between petrol and diesel variants, which reflects the enhanced appeal of the PureTech engines over earlier, older versions. 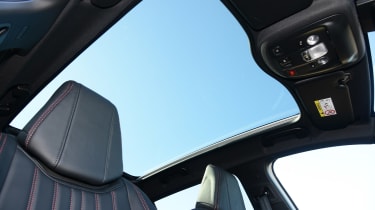 The star of the range is the GTi, with a retained value of over 45 per cent. But even the 1.5 BlueHDi 130 Active is predicted to hold on to over 40 per cent of its showroom price; moving up the range sees the retained value drop, so don’t get carried away if you want to maximise your return come resale time.