The 308 is comfortable and refined, with a big boot, although many rivals have more rear passenger space

The latest 308 is more practical than earlier models. The new platform gives a better driving position and more flexibility, although the back seats could still be roomier. Peugeot seems to have traded rear passenger space for boot capacity: if you want a better all-rounder for passengers and luggage, try the Peugeot 308 SW estate, which has a longer wheelbase.

Owners were a bit lukewarm on the 308’s seat comfort when responding to the Auto Express Driver Power 2016 satisfaction survey. They told us it’s merely adequate, ranking the car 93rd out of 150. Still, the seats themselves are nicely finished, while low engine noise ensures impressive refinement on the move, adding to the classy, premium feel inside the car.

It doesn’t look it, but the Peugeot 308 is a little bit shorter and narrower than the class norm. It’s 105mm shorter and 19mm narrower than a Ford Focus, and is a touch lower as well. This perhaps explains why interior space isn’t quite as good as it could be, particularly in the rear. Compared to the 4,465mm long Mazda 3, the 308 looks a bit short, at 4,253mm. It’s significant that the 308 SW estate has around 110mm added to the length of its wheelbase.

The 308 is a light car, though, with the 1.5 BlueHDi 130 Active model weighing in at just 1,204kg. A few years ago, this is the kind of figure we would have associated with a supermini, and shows the lightweight efficiencies of the new PSA Peugeot-Citroen EMP2 platform that the 308 uses.

The styling does make it hard to take full advantage of the car’s slightly more compact size, though: the back window is narrow and the C-pillars thick, and both compromise rear visibility. 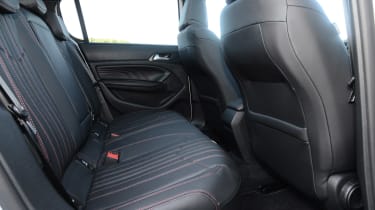 The Peugeot is rather disappointing for passengers in the rear, as a result of its short length and focus on maximising boot space. The rear doors are big enough, but there could be more space between the front and rear seats; climbing aboard can be a bit tricky. Foot space isn’t great, either, and the low-set rear bench only adds to the tight feel inside.

Getting out can be a struggle, too, particularly if you have bigger feet, and this is one of the few family cars in which adults in the rear may be asking those in the front to slide their seats forward. At least headroom isn’t bad – unless you choose the panoramic roof, that is. That's worth noting if you’re looking at Active models and above, as it’s a temptingly priced £500 option.

On paper, the 308 has a very spacious boot, offering 470 litres with the seats up and 1,185 litres once they’re folded. But this is a little misleading, as the shape of the boot doesn’t quite allow owners to make full use of the space. This isn’t the estate-rivalling luggage bay the figures suggest.

The 308 does offer extra hidden space below the load area, which is handy, but it’s a pity this versatility hasn’t been extended to the interior. The glovebox is tiny and the armrest cubbyhole, normally a useful stowage space, is also cramped.