The 308 is reasonably reliable, according to Driver Power, while the safety score is also impressive

In our 2018 Driver Power satisfaction survey results Peugeot came 17th out of 26 manufacturers ranked. While the 308 didn't appear in the lastest results (as a consequence of an insufficient number of responses), it did finish 19th out of 75 in the top cars to own from Driver Power in 2017. It gained strong score for ride and handling, as well as fuel economy and running costs. The only poor rating was for infotainment, connectivity and electrics.

Even though the car was crash tested in 2013, when Euro NCAP’s assessments were tougher than in previous years, it was still awarded a full five-star safety score. Adult protection was rated at 92 per cent, and child protection at 79 per cent. Pedestrian protection was 64 per cent, but testers rated the safety assist systems more highly, and awarded a score of 81 per cent. 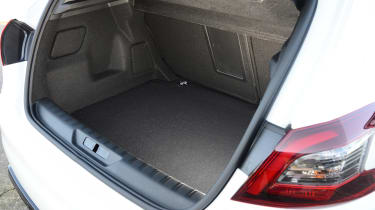 The 2017 facelift brought along additional safety kit, albeit with most of it ending up on the options list. Every car gets a speed limiter, while most models also get cruise control. High-end cars get an adaptive system, which for 2017 can now operate in slow-speed or stationary traffic. A more advanced autonomous braking system now operates up to 87mph, and speed limit recognition can also be specced.

A three-year warranty comes as standard with all 308 models. This consists of a two-year/unlimited-mileage Peugeot package, and an additional year’s cover provided by Peugeot’s UK dealer network. That's because the third year is administered by an insurer, rather than Peugeot itself: terms and conditions vary a little, but the warranties are generally identical – albeit limited to 60,000 miles in the third year.

Peugeot offers long service intervals for the 308, but they are dependent on the engine you choose, so take note. The 1.2-litre petrol and 1.6-litre diesel models need maintenance every year or 16,000 miles, while it’s every 20,000 miles for the 1.6-litre petrol and 2.0-litre diesel. A general rule of thumb is that the bigger the engine in the diesel and petrol range, the longer the intervals – and this has been done at least in part with high-mileage company car drivers in mind.