The 308 has a modern, hi-tech interior that's packed with features, although it's not the easiest to use

Viewed alongside some of its rivals, the 308’s smart yet subtle styling appears a little low key. But Peugeot’s designers have paid particular attention to the details, with some neat touches dotted all around the car giving it an upmarket air.

Gently flared side skirts and the ‘lion’s claw’ tail-lamps that reference the brand’s badge all sharpen up the standard 308’s flowing front end and squared-off tail. The classy look is reinforced on Allure models and above with eye-catching 17-inch alloys.

For 2017, Peugeot revised the front-end shape with a new, more prominent central grille, reprofiled headlights and tweaked bumpers. It's all designed to bring the 308 into line with the carmaker's SUV range, but doesn't alter the look dramatically.

From the outside, the 308 seems restrained rather than racy, and that theme continues inside, where the focus is on build quality and comfort. Peugeot has given the 308 a high-quality interior that’s modern and stylish in design. It’s more modern and contemporary than the slightly traditional layout of a Volkswagen Golf, while the premium materials, fit and finish seem right up there with the German hatchback. It’s a good achievement by Peugeot - although almost nothing has changed for 2017.

The dashboard has a couple of real highlights. The 9.7-inch touchscreen controls the navigation, radio and air-con, so there are very few buttons on the car’s centre console, giving the interior a sleek look. The instruments are novel, too, with the rev counter operating in a ‘reverse’ direction to the speedo. This is odd at first, but it’s a cool touch once you’re familiar with it. 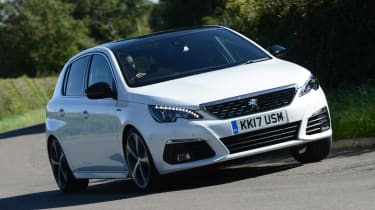 In the centre of the soft-touch dash are some beautiful details, such as the sleek centre console surround and fancy air vents – but there are very few buttons. Everything, including the heater and stereo controls, has been centralised in the high-resolution touchscreen in the middle.

Once again, it’s something you have to ‘learn’: pressing two or three buttons just to change the heater temperature is fiddly at first. The system does work smoothly enough, though, and is nicely presented. It gives the 308 a hi-tech feel.

Plus, inside there’s a Driver Sport Pack – press its sport button and the steering is heavier, the throttle sharper and the dials turn from white to red. It also has a Driver Assistance Pack with autonomous emergency braking and radar cruise control. As for GTi models, they include all the high-performance extras you’d expect of a modern hot hatch.

A key selling point of the 308 is the fact that sat-nav is now standard on every model in the range. Peugeot even includes five years’ mapping updates with the 9.7-inch touchscreen system.

For 2017, the sat-nav graphics have been updated for a clearer look, while Android Auto and Apple CarPlay smartphone connectivity now features. The screen is no easier to use, however, feeling unresponsive and tricky to navigate. 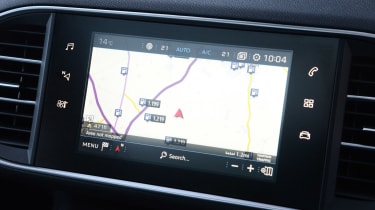 While the touchscreen is neatly integrated, some owners are put off by the set-up’s complexity. This was reflected in the Auto Express Driver Power 2016 satisfaction survey, where the 308's lowest ranking was for in-car technology (98th out of 150 cars) – perhaps a bit disappointing for Peugeot, given the car’s reliance on the touchscreen system for so many of its major functions.

The interface isn’t snappy enough to make changing the air-conditioning settings easy, so you end up fighting with the system to do a simple task such as increasing the fan speed. The screen isn’t the most responsive, either, and is put to shame by the more intuitive, faster-to-respond unit in a VW Golf, for example.