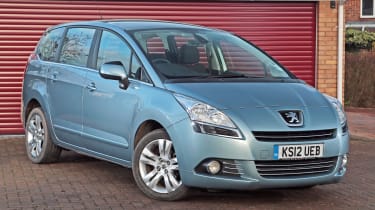 When we first drove the Peugeot in 2009, we reported: “The 5008 is a surprise. Mature styling, a compliant ride and sweet handling are matched by a punchy yet frugal range of petrol and diesel powerplants... But it’s the interior that matters on a car like this, and Peugeot has done a superb job.” We still like the car’s handling, ride comfort and cabin, but reliability and build quality can be an issue. Scrutinise any potential purchase carefully before buying.

An all-new Peugeot 5008 will be with us soon, and it’s set to be quite a different animal from the outgoing model.

The original 5008 was seven years ago as a seven-seater MPV, and was a big step up in quality and driving dynamics over the cars that had gone before. Peugeot had introduced its first people carrier, the 806, in 1995, and the more stylish 807 in 2003. But each new arrival was trying to get a slice of an even smaller pie, as buyers migrated away from MPVs towards SUVs.

As a result, the new 5008 – on sale later this year – has a more SUV-like profile. But the MPV-style outgoing car can still make a fine used choice if you know what to look for. 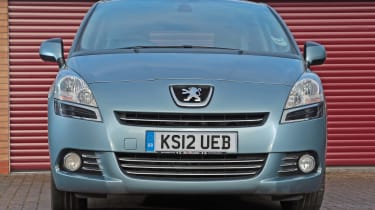 All cars featured air-con, a panoramic glass roof, seven seats and ESP as standard. At launch the trim levels were Active, Sport and Exclusive; these became Access, Active and Allure in spring 2013.

A facelift followed a year later, with the 5008 getting a refreshed nose, upgraded interior and the option of a rear parking camera, as well as reduced CO2 emissions.

If you do lots of short journeys, it’s worth buying a 1.6 THP to avoid diesel particulate filter issues (the VTi is best avoided as it lacks zest), but petrol 5008s are rare. 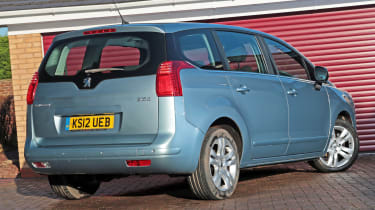 Alternatives to the Peugeot 5008 Mk1

Our favourite used MPV at the moment is the multi-talented SEAT Alhambra, which features car-like handling, a cavernous interior and very good build quality.

However, the highest-rated MPV in our Driver Power 2016 satisfaction survey was the Renault Scenic/Grand Scenic Mk3, thanks to its versatility, space, economy and value. Plus it’s proving to be well built and reliable, too. We’re also fans of the previous Citroen Grand C4 Picasso because of its versatile seven-seat layout; 96th in Driver Power suggests owners love it less, though. 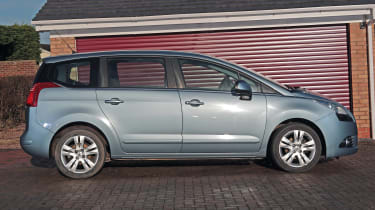 Other MPVs worth a look include the Vauxhall Zafira, Ford S-MAX, VW Touran, Mazda 5 and Toyota Verso, all of which offer versatility and space with ease of driving.

The interior trim gets damaged too easily, which isn’t ideal for a family car that’s designed to carry up to five small children.

Rear parking sensors are essential, because it’s so hard to tell where the car ends. Buy a model without and you’ll scrape it.

There are cubby holes set into the floor behind each of the front seats. The lids for these give way once they’ve been stood on.

Brake discs can wear quickly, even on cars not used around town much, so check for wear and warping before buying. 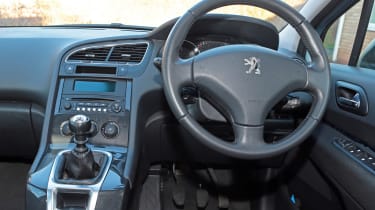 The 5008’s interior is easy to use thanks to its conventional design, although it’s quite busy, so takes some getting used to. There’s a focus on versatility; rows two and three can be folded flat to create a 2,506-litre load space. The third row of seats is cramped for adults but ideal for kids or teenagers.

All Peugeot 5008s need to be serviced every 12 months or 20,000 miles, although it’s recommended that cars used in stop/start or urban traffic a lot have a check-up every 12,500 miles or annually.

Services alternate between minor and major, priced at £140 and £250. Peugeot dealers offer an Essentials programme, which uses pattern parts to cut prices to £115 and £195. The same programme sees parts prices cut, denoted by the prices in brackets in the table below.

A cambelt is fitted to all engines apart from the THP units; it should be replaced every 10 years or 120,000 miles at a cost of £345. Fresh brake fluid is required every two years, at a cost of £49. 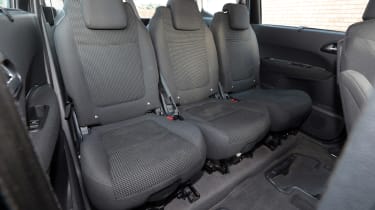 A total of nine recalls is poor. The first came in August 2010 as the windscreen could detach; the next in January 2011 as the rear window motors could short – then again in August 2011. There were fuel leaks on 2.0 HDi models in February 2011. In January 2013, cars were recalled as the rear brake caliper mounting plate could loosen. In March 2013 failed spot welds were noted, and then airbag glitches in April 2014. In December 2015 came more fuel leaks, and engine oil leaks in March 2016.

The 5008 came 137th in our Driver Power 2016 satisfaction survey. It managed a top 100 place in just three categories: 72nd for practicality, 87th for running costs and 91st for performance. Lowest score was 148th for seat comfort; build quality came in at 147th, while it was 145th for handling.