We take to road in lower powered version of stunning coupé. 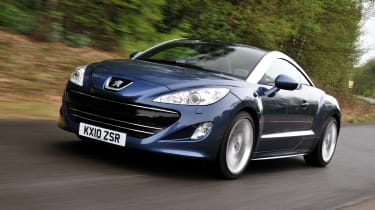 At last – Peugeot has created a vehicle that is truly desirable. The stand-out feature is the styling, which turns heads wherever you go. What’s more, there’s a genuine feeling of quality throughout the car. If driving thrills major on your list of priorities, then we’d advise you to spend the extra for the range-topping 200bhp model – because while the 156bhp version is still good to drive, it’s not quite as much fun.

When it comes to exotic cars such as Aston Martins and Ferraris, people often cross the street to take a closer look. This, however, doesn’t tend to happen with a Peugeot – but it did the other day, when we were driving the RCZ. The amount of attention the newcomer attracted left us in no doubt – the French firm is on to a winner with this coupé.

It’s a stunning head-turner which looks a million dollars, but costs hot hatch money. Appearance isn’t everything, though. For the RCZ to go down in history as a truly great Peugeot, it also needs to be thrilling to drive. In the case of the 200bhp model, which we experienced on smooth Spanish roads (Issue 1,107), it is.

But what about the entry-level 156bhp version? After all, it’s this variant which is going to be the biggest seller. With prices starting at £20,450, it’s a useful £2,300 cheaper than the 200bhp version. There is, of course, an obvious trade-off in performance. Top speed is down to 133mph while, more importantly, 0-62mph takes 8.3 seconds instead of 7.6.

In this lower state of tune the 1.6-litre turbo still feels really sweet, revving freely and smoothly. It’s just that it never seems to deliver that bit of extra performance when you accelerate. This, plus the car’s 1.4-tonne kerbweight, means you have to work the gearbox quite a bit to get the most out of the car.

Thankfully, the six-speed transmission is super-slick. A short-throw version is optional, but the standard system is good enough. The only complaint is the RCZ’s clutch: unfortunately, it has a springy feel to it like virtually every other Peugeot model.

A reduction in power isn’t the only difference between this 156bhp car and its more muscular stablemate. A less aggressive chassis set-up means the handling isn’t quite as sharp, although there’s still plenty of grip and little body roll. However, the cheaper RCZ’s steering isn’t as responsive and the whole car is somehow less engaging. Does this really matter, though? Probably not.

For most people, the 156 will be perfectly sporty enough. Besides, the RCZ’s looks alone are enough to sell it. That double-bubble roof is the stuff of concepts, and the rest of the design is so alluring that even Peugeot’s gaping grille manages to work.

Inside, the RCZ is just as special. The cabin has a real feel-good factor about it. You sit low and getting comfortable is easy. Our car was the GT model, which has leather seats. It also came with optional hide on the dash – a really nice touch which helps make the RCZ feel far more upmarket than its price suggests.

And that just about sums up this Peugeot: if you are after a head-turning coupé, nothing delivers this much style for the money. As we said at the start, Peugeot is on to a winner.

Rival: Audi TT The German coupé is the benchmark with its classic styling and unrivalled build quality. Downsides? It’s become a bit ubiquitous and is significantly more expensive than the arguably more eye-catching RCZ.