A technological feast with awesome performance, the 918 Spyder was even cheap by hypercar standards at 'only' £650k 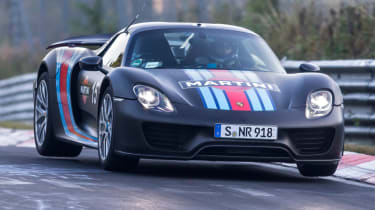 The Porsche 918 Spyder is a rocket ship designed to push the boundaries of hybrid performance as far as possible. Unfortunately for most of us, that might as well mean into outer space – although the Porsche 918’s £650k price tag was at least a little more accessible than some of its hypercar rivals!

Power comes from a V8 petrol engine and front and rear electric motors, which combine to produce 875bhp and 1,280Nm. Handling is superlative, as you’d expect from a Porsche, but with its plug-in hybrid tech you can also cruise around in silence on batteries only for up to 18 miles.

When you’re bored with that, a prod on the accelerator wakes the dormant beast, and the 918 will hit 62mph in 2.5 seconds and race on to a maximum speed of 214mph. The 918 Spyder was one of the first production cars to monster the famous Nurburgring old circuit in under 7 minutes too, but on the road it's docile and easy to drive making it the perfect poser mobile.